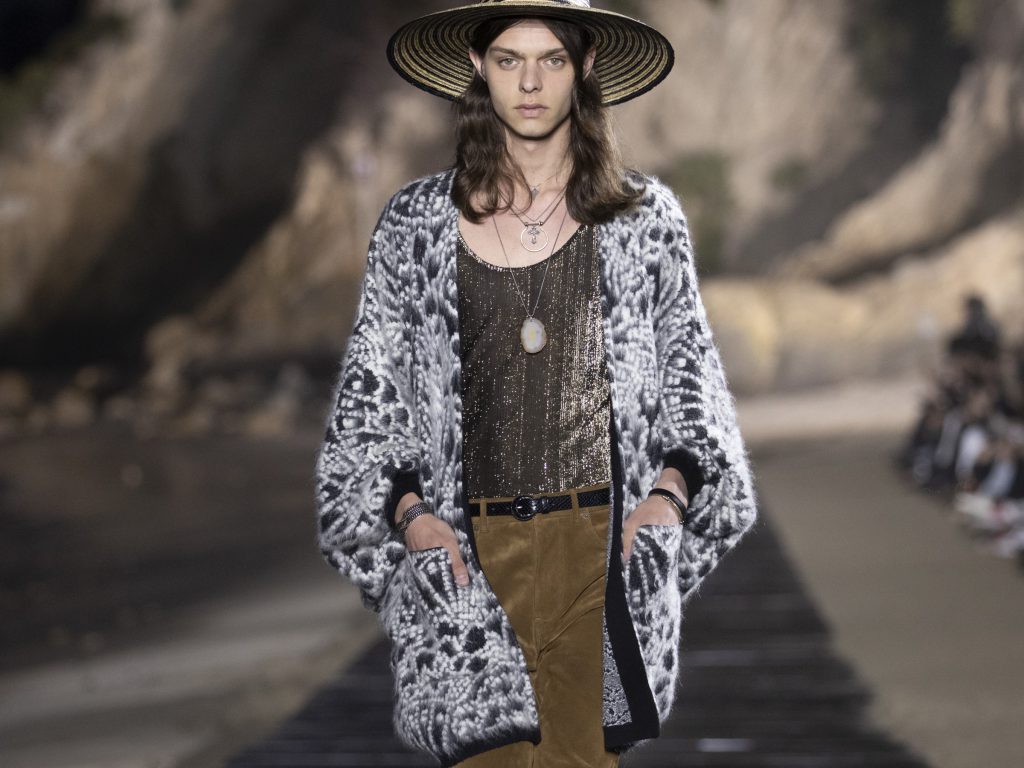 For Anthony Vaccarello’s second menswear showing for Saint Laurent Spring/Summer ’20, the creative director pulled out all the stops and gathered the international press at Malibu beach. The sandy location brought to mind Miley Cyrus’s Malibu, a song about rekindled passions in life – not purely because the scenography bear the same name, but it also set the mind to wonder if the romantic background would be an inspiration for Vaccarello to introduce a refreshing beach-themed dimension to the French house famed for its Parisian-rocker chic.

That fleeting thought was truncated when Cyrus walked across the runway, holding hands with then-fiancé, Liam Hemsworth. The show’s star-studded roll call continued with Keanu Reeves, Hailey Bieber, G-Eazy, Charlie Puth, and Men’s Folio cover star JB of GOT7. This impressive group front-row attendees served as a prelude to the exciting show ahead.

To further set the scene, the audience had been seated to face the Pacific Ocean, and they were informed that the show had been postponed to an hour later. The reason behind the delay would later become apparent as the show would only begin when the Sun was setting beyond the horizon. Dramatics were high as music was not piped, so the sounds of lapping waves became the only soundtrack. Then, a lone seagull flew across the seascape to complete the moment of tranquillity.

After sunset, the first look hit the runway – the model wore a studded silk satin short sleeve shirt over a tank top, paired with sheer embroidered bohemian harem pants held high-waisted by a wide belt, completed with high-top sneakers. This communicated a new lexicon Vaccarello was introducing to Saint Laurent. 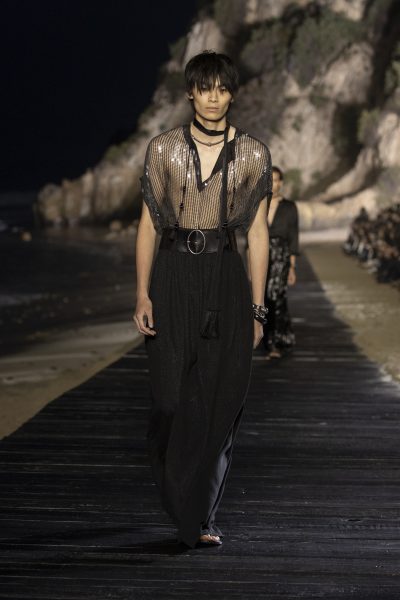 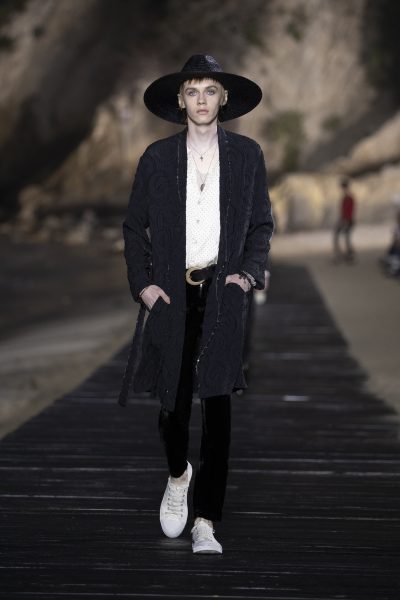 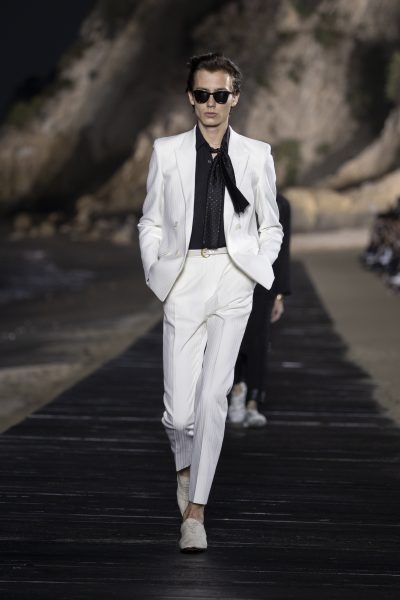 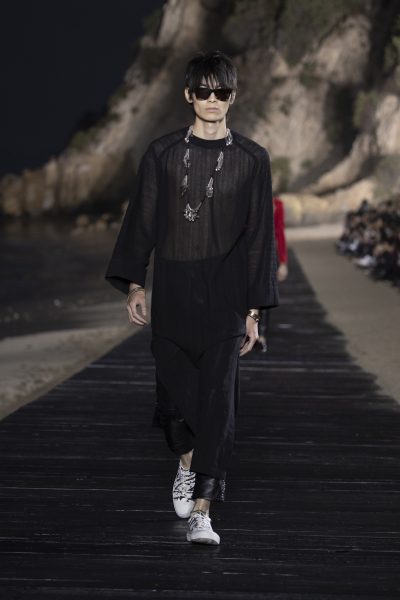 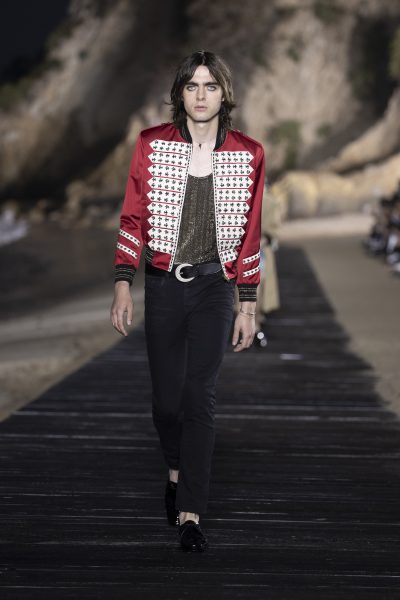 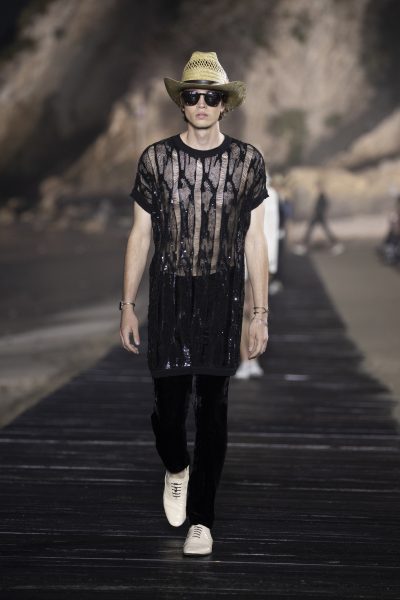 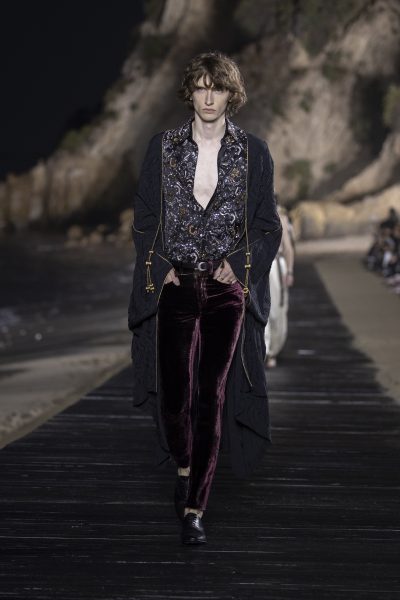 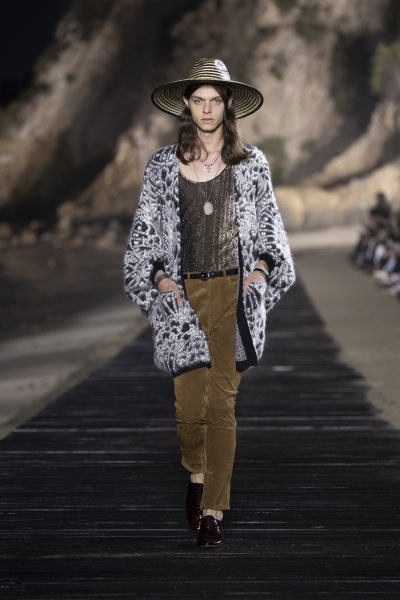 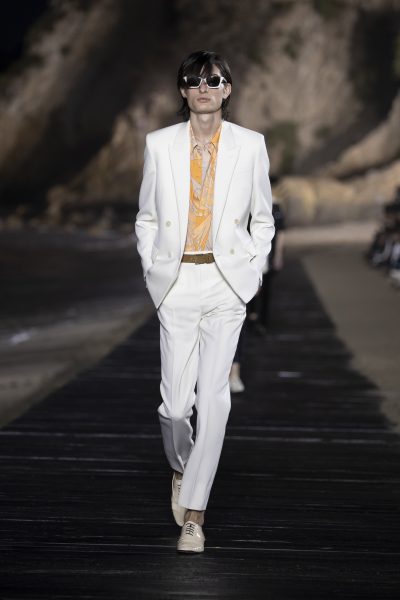 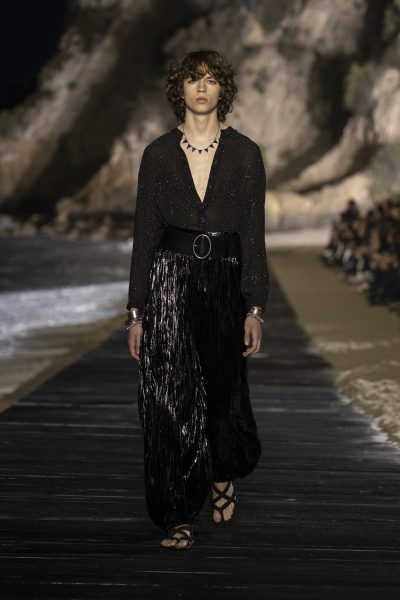 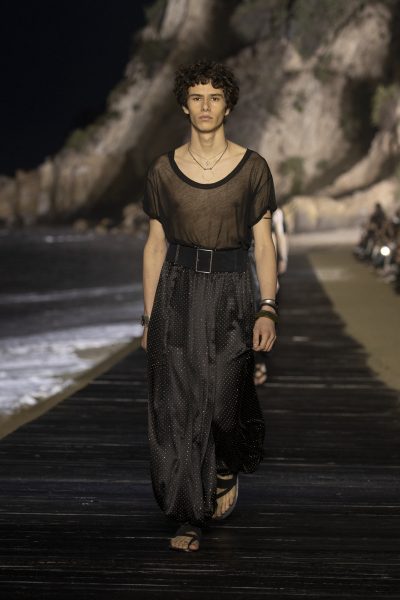 Monsieur Yves Saint Laurent’s penchant for Marrakesh is no longer just an inspirational afterthought peppered into the commercially viable rocker, skinny silhouette that the brand came to be known for in recent years. While Vaccarello had been loosening silhouettes in recent seasons – introducing bootcut for Spring/ Summer ’19 and loose-fit pleated pants for Autumn/Winter ’19 – the inauguration of the all-out fluid harem pants still came as a surprise.

The eagerness to embrace the founder’s love for Marrakesh also came through with a series of sheer cotton and sequins tunics, kimono-like short sleeve tops, and lightweight robes. The paisley print, synonymous with the Moroccan city, has been reimagined as contemporary swirls, and some models strutted down the runway in luscious, easy suede sandals.

Vaccarello was smart to deviate from solely basing his Spring/Summer ‘20 collection on Marrakesh because that would be like flogging the proverbial dead horse in fashion. Instead, the creative director delivered what Saint Laurent fans love – irreverent rock allure.

In the Spring/Summer ’20 collection, the point of reference was The Rolling Stones’s frontman, Mick Jagger, circa his 1975 concert tour. The sensibilities of Jagger’s wardrobe can be seen throughout the collection – from military-inspired epaulette jackets and shirts, glitzy Teddy Boy bomber jackets, and unbuttoned louche silk satin shirts to corduroy pants and monochromatic plimsolls. 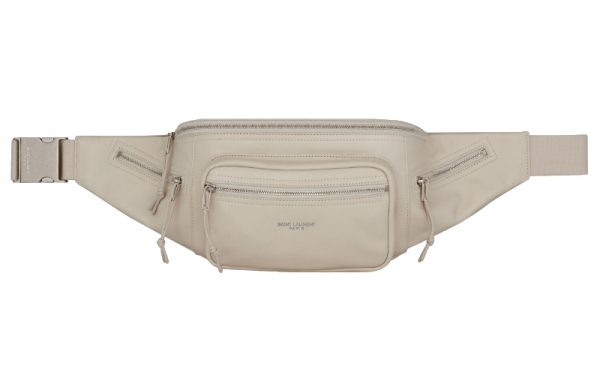 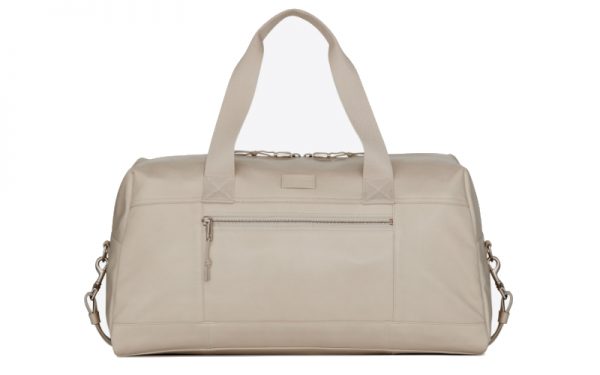 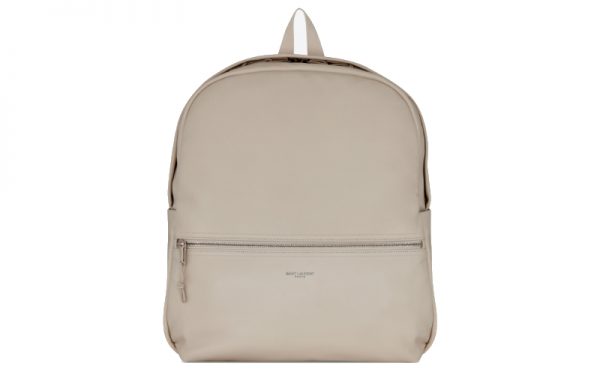 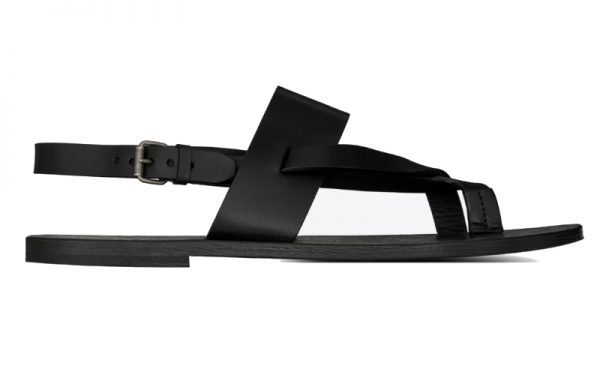 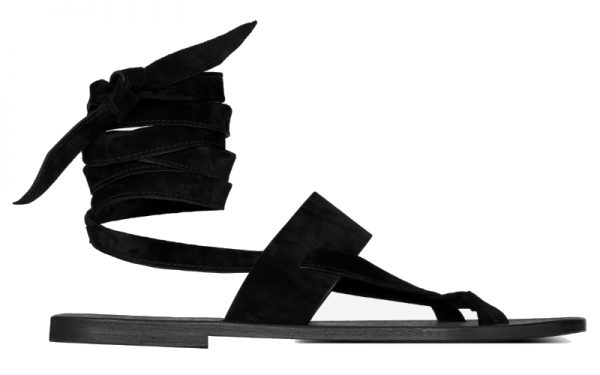 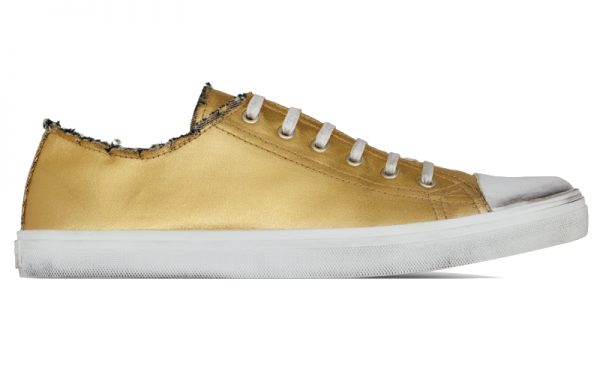 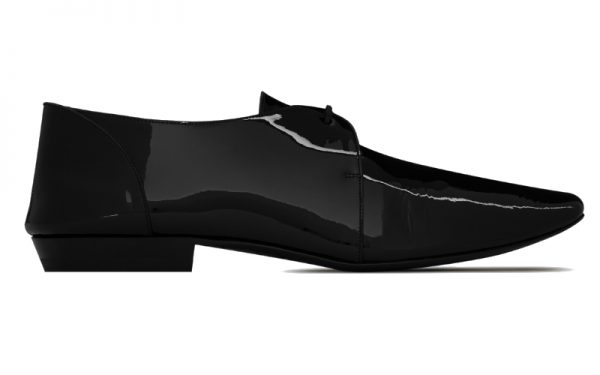 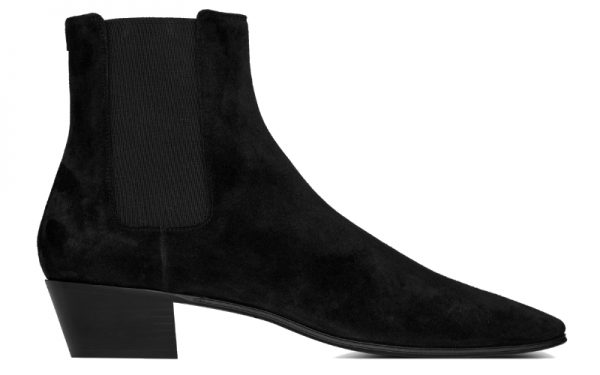 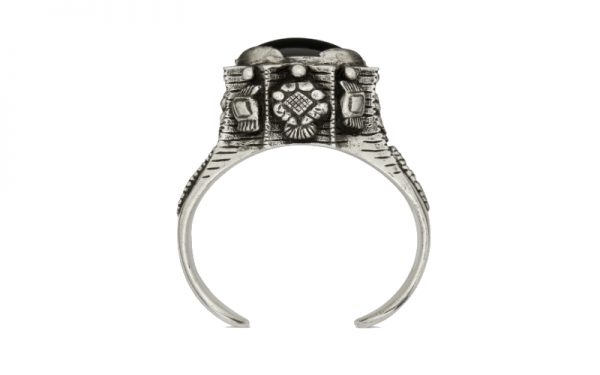 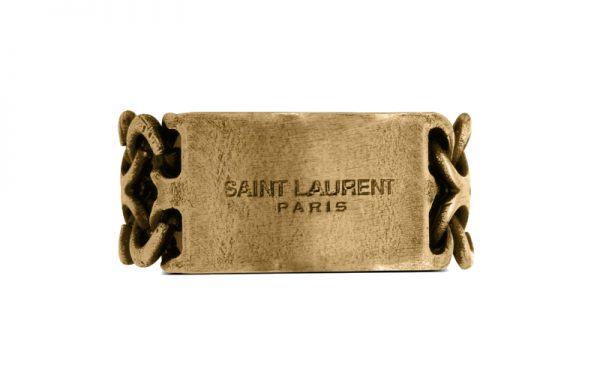 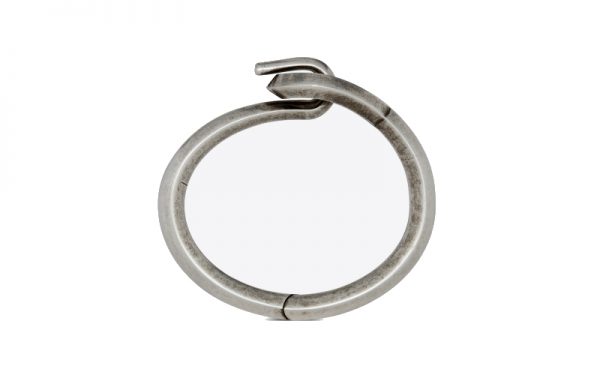 While the beach would have provided the ideal setting to present a summer wardrobe, the only article of clothing that pandered to it was the cutout denim shorts – a first for Vaccarello on a Saint Laurent man. Malibu beach was to serve as a point of disconnect from the rest of the world rather than a source of inspiration.

Rather than staging at the obvious Marrakesh, Vaccarello took the bohemian energy to a congruent Los Angeles. This is his triangulation method: deploying harmonious themes – the maison’s mark of rock cool by way of Mick Jagger, its French origins inspired by Serge Gainsbourg, and the founder’s fondness of free-spiritedness – to deliver on a collection that bridges current fans to those of ages past.

In doing so, Vaccarello added a new bohemian vocabulary to Saint Laurent, and the summary is in the Spring/Summer ’20 finale – 20 looks anchored by the harem pants, and each stylishly paired with an interpretation of the three starting points. Bohemian never looked so sexy.

This story first appeared in the December/January ’20 issue of Men’s Folio.