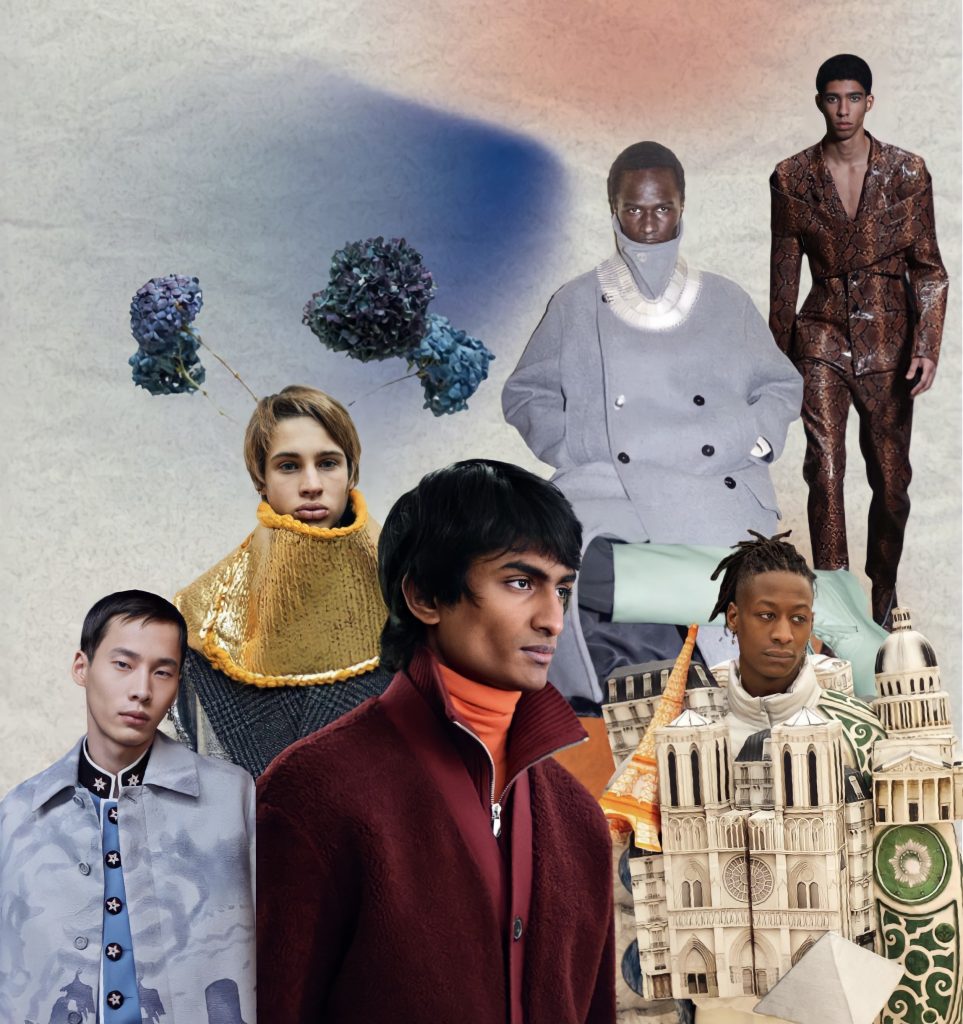 Fashion Month has come and gone again. This season marked the second time brands ascending to digital platforms to showcase their newest menswear collections due to the pandemic.

However, losing the constructs of traditional shows has clearly not limited these designers, as each brings a refreshingly unique perspective in their navigation of the digital realm. And as expected, Paris pulled out all the sartorial stops. Following six-day digital extravaganza, we round-up the top collections of this year’s Paris Men’s Fashion Week Autumn/Winter 2021.

Continuing his brilliant roster of inviting artists to collab at Dior Men, Kim Jones has tapped the genius Scottish artist Peter Doig for his Winter 2021 collection. Ever since he took over the reins at its menswear division, one of the Jones’s triumph at Dior has been the technical finesse of transcribing works of art onto super delicate fabrics and this collection is no different – and yet, he keeps on raising it. Capturing Doig’s “bewitching universe”, the opulent collection explored ceremonial dress, taking inspiration from Dior’s decadent haute couture history. To read the full show report, click here.

Veronique Nichanian has for years been expressing the power of savoir faire via men’s clothing and that tradition continues with her latest Hermès Men’s AW21 collection. Merging the outside and the inside as the key idea for this outing, the designer presents comfort, luxury, craft and technical excellence in every piece, with thoughtful details that would make transitioning from wearing them outside to lounging indoors as seamless as possible. “The inside and the outside now freely flow one into one another, as do the personal and the public, the private and the professional. I wanted my clothes to reflect that,” said the Hermès men’s designer. Soft tailoring, elevated workwear and luxe sportswear alike were all cut with the ease of loungewear, grounded either by glossy leather boots or brightly-coloured sneakers. Pockets were turned into graphic details, twisted and placed askew — their outlines picked out in saddlery stitching.

In Virgil Abloh’s most accomplished, ambitious collection for Louis Vuitton yet, he explored different males archetypes for an outing that brings together the ideas of jet-setters, salesmen, artists and drifters. Presented the collection via a film Peculiar Contrast, Perfect Light, the show was divided in three-act segment that was more multidisciplinary performance art than standard fashion show – there was dance, skating, staged tableaus and spoken word poetry accompanying the clothes. And what a show it was: riffing on the idea of art heist, the expansive collection touched on topics such as the “new normal”, architecture, travel and black excellence With a dapper, 1930s gangster aesthetic, duster coats, pinstriped suits and unstructured fedoras made their appearance. The city of Paris was also referenced in a playful ‘tourist vs Paris’ slogan on tops and caps as rendered fantastical 3d on a sweater.

Dries Van Noten is “dressing for our days” as seen through his A/W 21 collection. Rife with rich textiles and flourishes, the collection sees the values of sportswear and a formal wardrobe interchange in a relaxed hybrid that feels appropriate for endless days spent working from home. The designer says, “It was about going to the menswear wardrobe staple. It was really nice to be able to work on construction, on shapes, on volumes, rather than really bold colours and print.” The clothing was pared down to essential silhouettes in unexpected materials such as ultra-light duchesse cotton which was imported from the womenswear division to be used as a suiting material. A solid grounded collection but also strongly expressive and imaginative.

This season, Serhat Isik and Benjamin Huseby wanted to create clothes of dreams, rather than the mundane pragmatism of our everyday lives. Titled “Welt am Draht” (World on a Wire), the collection is inspired by the 1973 TV show of the same name which suggests that our reality is not what we make of it, and that our world lives within another world, perhaps as a computer simulation. The result saw a collection that made us disconnect from reality, oozing with masculine glamour and features vegan leather trench coats, sparking necklaces, faux fur stoles and bodycon knits – elements that aren’t classic in men’s wardrobe. The collection also saw the return of the brand’s classic elements including GmbH’s signature body-hugging knitwear, distorted tailoring and trim zippered trousers, often interrupted by a series of X-shaped wraps realized in suiting wool and textural faux fur.

Hed Mayner continues his boundary-pushing silhouettes for his A/W21 collection which signals a growing maturity and polishness to his creations of constructed tailoring. Mayner has channeled his signature touches through a range of flowing coats, collarless jackets, lengthy sweater and voluminous trousers executed in rich camel, olive drab, crisp white and delicate cream. The show notes read that this season is an “ode to the performance of getting dressed,” where each look was tailored to take the wearer from outside to the inside. Throughout the collection, the former LVMH finalist referenced his past works – shapely cut-out section, ballooned trousers, huge turtlenecks and puffer jackets – and updated them with fresh applications and fabrications.

JW Anderson latest collection is here to make fashion fun again with playfulness and surrealism. For this collection, the designer said he was working more than ever on instinct, questioning not “why”, but “why not?”. The resulting men’s collection and women’s pre-collection was captured by Juergen Teller in London were what Anderson described as “blunt, very honest, raw clothing that is what it is”. The journey down the rabbit hole begins with the juxtaposition of classic menswear with whimsical silhouettes. Gender subversion comes in the of reimagining a mohair sweater as a belted dress. The motif of peaches and squashes drew inspiration from 17th century Dutch still lifes. The collection is a masterclass in layering contrasting textures and silhouettes.

“Intimate, sharp, layered, utilitarian,” were the words Jil Sander used to describe Luke and Lucie Meier’s focus on the new menswear collection for the brand, which was inspired by Florence Henri’s 1920s portrait of the women of the Bauhaus movement. Taking familial affection and power of touch as the center point of this collection, the duo proposed a range of soft, lean silhouettes and meticulous layering highlighted a need for connection, touch, and intimacy, reinforced by sentimental details like necklaces with the word “mother” handwritten and portraits of women creators shot in the 1920s by Florence Henri seen as graphics on outerwear. This season’s silhouettes also fused the duo’s signature sharp cut with comforting elements for a range of enveloping wool coats, elongated tailoring, roomy knitwear, fluid overshirts and comforting knitted collars in a splash of unique colour palette of navy, burgundy, white as well as more seasonal shades of teal, reddish-brown and pastel pink.

Botter’s latest collection is all about giving back to nature. During lockdown, co-founders Lisi Herrebrugh and Rushemy Botter teamed up with Curacao government (Rushemy’s birthplace) for a coral beef rehabilitation by setting a nursey to preserve the underwater ecosystem. On this project, Rushemy explained, “We spent the past year researching how we can use recycled ocean plastic waste throughout our collections so that a percentage of our sales can be funnelled back to the coral farm.” Aptly named “Romancing the coral beef”, their effort translates perfectly into the collection as the duo produces recycled polyster and wool blazers and suits while an array of fluid anaroks and raincoats are crafted from surplus nylon umbrellas sourced from an old umbrella factory. What a conscious collection and a poetic way of giving back to nature for what it has given to us because, “Without nature, no arts, nothing. Without the sea, no human, no us”. Styled focused and sustainable? That’s what we like to see.

This collection marks Y/Project’s most expansive proposal to date by merging both menswear and womenswear in one show (the brand will now show twice a year opposed to four, on the menswear schedule). Creative director Glenn Martens is known to walk the tightrope between good taste and bad and it’s evident through 64-looks that blur the lines of the ordinary and the challenges the accepted norms of wearing clothes. Taking his mastery of fabric to the forefront, he shapes majority of the looks into wearable sculptures which are threaded with metal wiring, giving the wearer to freedom to restyle the garment as they please. It’s a technique Martens introduced for A/W17, turning oversized T-shirts, outerwear, opera gowns and the brand’s signature denim into ultra-versatile pieces. The asymmetric game also ran high in the collection: from bombers with overlays, trench coats with volumes, twisted and frozen shirts or detachable trousers. Rounding off the collection is a cape made in collab with Canada Goose melding protection and chic.