Corum breaks codes with its 2019 novelties 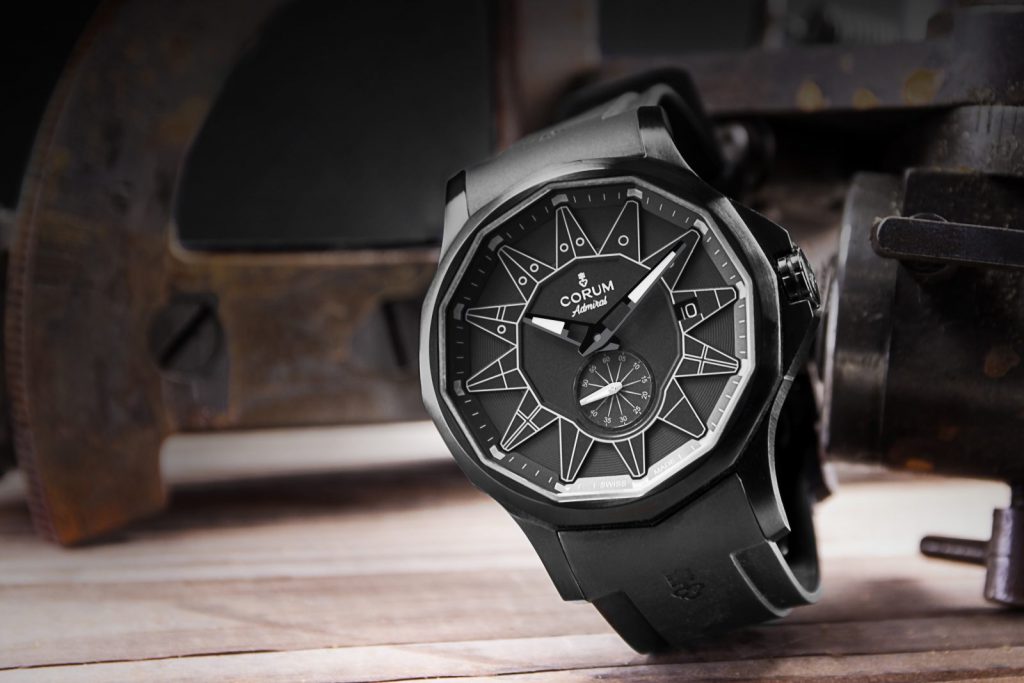 When Corum released its first Admiral’s Cup timepiece back in the ’60s, the unorthodox yachting watch with a water-resistant square case awestruck watch connoisseurs. However, in case you don’t already know, the Admiral collection as we know it – with the familiar 12-sided case and nautical pennants on the dial – is the evolution of the redesigned 1983 piece. In the year 2010, the collection celebrated its 50th anniversary with the launch of the Admiral Legend range – boasting an ultra-streamlined silhouette – which gave birth to Admiral Legend 42 that went on to become one of Corum’s highly coveted line-up.

As time goes by, the regatta-dedicated Admiral collection has not only made itself a pillar of the watch brand, but also one of the most iconic nautical-inspired range on the market. This year, all eyes are on the limited-edition Admiral 42 Full Black – a clear departure from its vibrant predecessors. Equipped with the automatic CO 395 movement, the iconic dodecagonal case in black PVD-treated stainless steel is matched with a blackened brass dial. The nautical pennants, minute markers are presented in greyscale tones against the all-black design, while markers for the minute and small seconds are made noticeable using a tone-on-tone effect. The Dauphine-style skeletonised hour and minute hands are also given the black PVD treatment, and then filled with white SuperLuminova to ensure readability in dark. Vulcanised black rubber straps with a black PVD-treated buckle complete the edgy look. Bereft of colours, this mysterious yet intriguingly captivating timepiece goes well with both formal and casual ensemble. 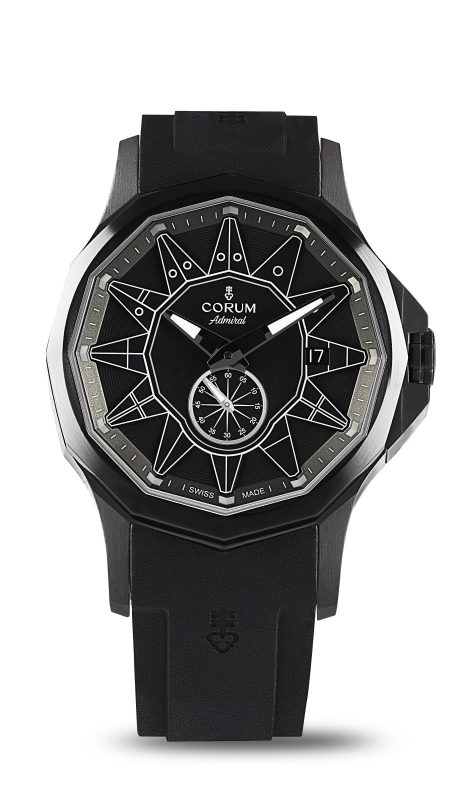 Speaking of the Admiral collection, the key piece will have to be the light and refined AC-One 45 Openwork Automatic. Designed as a robust timepiece to complement luxury offshore boating, it pushes the boundaries of originality. Featuring an exquisitely crafted skeletonised dial, the movement fitted within is the Calibre CO 297, a new in-house movement developed specifically for the timepiece. The bridges visible on the dial side are designed to be in harmony with the dodecagonal-shaped case, as well as the silhouettes of the nautical pennants. A sub-dial displaying small seconds is at the 9 o’clock position, while the power reserve indicator sits at 3 o’clock. 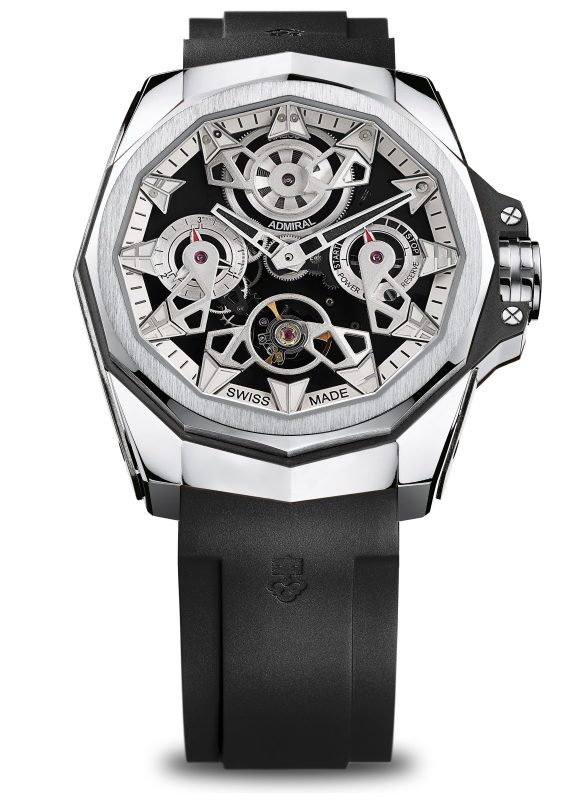 Aside from the one with a case crafted in grade 5 titanium and another in rose gold with black PVD-coated titanium, Corum also shows off AC-One Openwork Tourbillon where the tourbillon can be spotted at 6 o’clock. It showcases not only the captivating heartbeat of the movement, but also Corum’s impeccable artistry and flare in technical watchmaking. Both variants are outfitted with bi-material straps made to integrate seamlessly with the lugs, which protect the lugs and straps from getting damaged while making wearing the watch more comfortable. 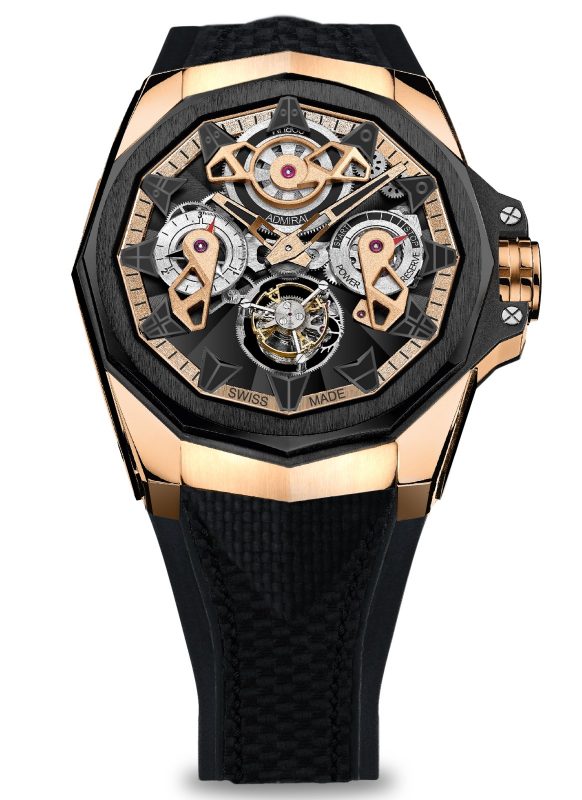 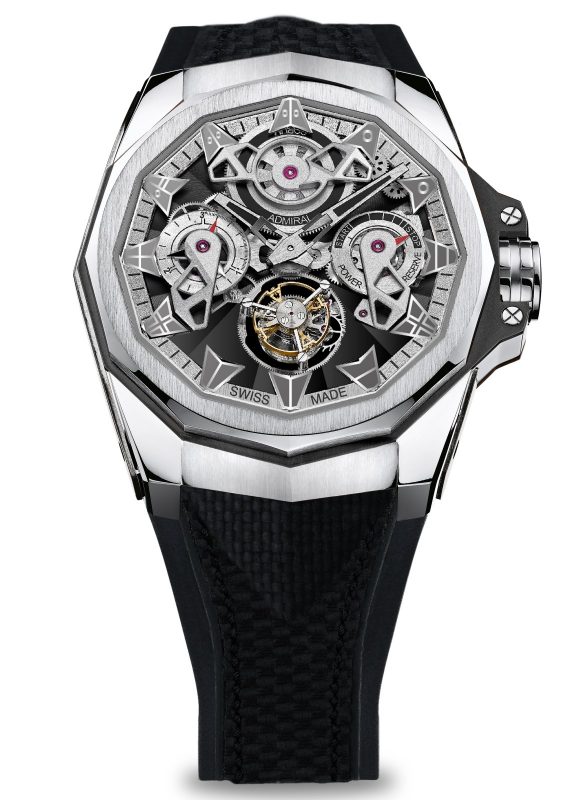 First unveiled in late 2018, the Corum Lab collection debuted two limited-edition timepieces which emphasised on the dialogue between the past and the future. This year, two new members join the Heritage Corum Lab 01 family.

The Heritage Corum Lab 01 Damascus timepieces keep their idiosyncratic barrel-shaped cases like their predecessors, but produced in Damascus steel. The use of Damascus steel represents a nod to history while the revolutionary design of the Lab 01 embraces the experimental and modernistic approach to watchmaking that the brand strives for. Driven by the Calibre CO 410, the curved, barrel-shaped skeleton movement is designed to fit the case. The signature Corum micro-rotor is finished with a contemporary spiral effect, which is visually stunning when it begins to rotate.

The Damascus steel case is applied with black DLC coating, while the movement is given the Côtes de Genève finishing. The hour and minute hands are filled with SuperLuminova in the same colour as the rubber inserts to enhance their legibility. The unpredictability on how the wavy patterns on Damascus steel will turn out during the forging process also means that every watch case will have a unique pattern like no other. 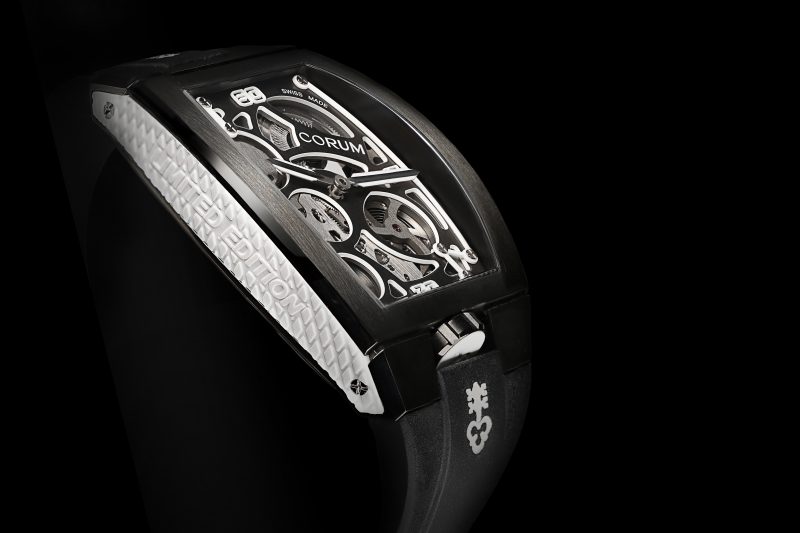 Last but by no means least, the Golden Bridge. Since its introduction in 1980, the Golden Bridge has become the quintessential Corum timepiece. The renowned baguette movement was later improved and modernised in conjunction with the brand’s 50th anniversary in 2005. Five years ago, Corum showcased a remarkably graphic edition of its signature Golden Bridge timepiece, featuring a dragon wrapped around the iconic linear movement. In 2016, the manually-wound Calibre CO 113 became the centre of attraction of a new generation of Golden Bridge watches: the first-ever Golden Bridge Round.

This year, the Golden Bridge Round has done away with its original girders. Instead, an 18-carat Chinese dragon sculpted and engraved entirely by hand embraces the movement while leaning against the inner ring of the case. Unlike the dragon housed in the earlier barrel-shaped Golden Bridge model whose torso was only partially visible, one can admire the almost unbelievable majestic beauty of the dragon in the round case, in its entirety. From the case-back, the lower-half of the dragon appears to coil around the back of the movement, and on its tail-end sits a pearl. 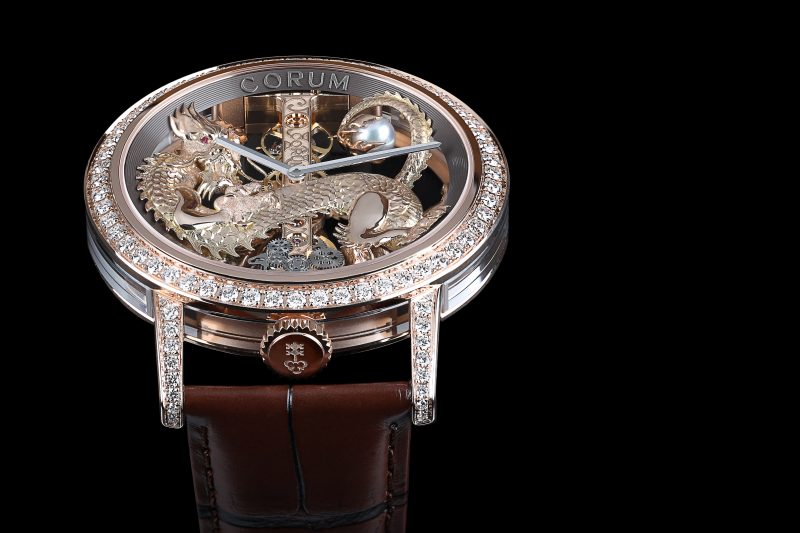 Every little detail on this mythical creature, including its fins, scales and claws is carefully crafted by the artisan’s deft hands. Powered by the unparalleled manual-winding Caliber CO 113, the Corum Golden Bridge Round 43 “Dragon” comes in two variations: a rose gold edition with an 18-carat gold dragon and a white gold edition which houses a dragon made in 18-carat gold rhodium. Both are set with 52 diamonds on the bezel and 32 on the lugs while the eyes are set with rubies.