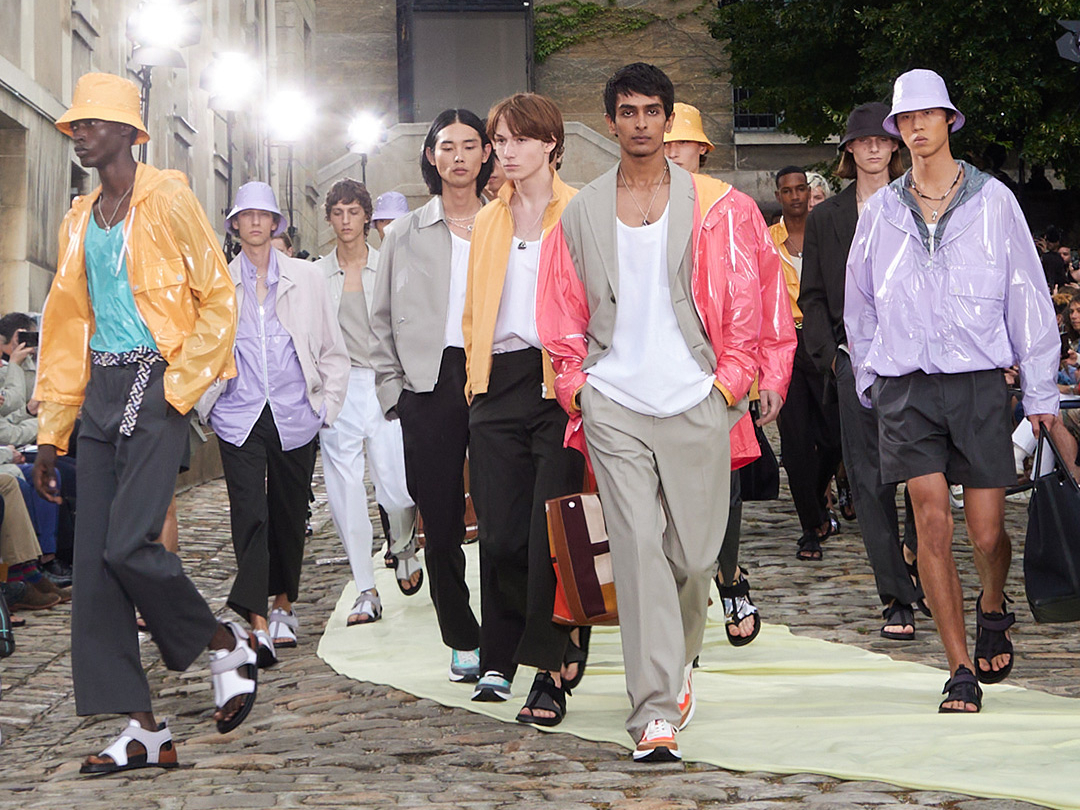 In our constant chronicles of Hermès and the House’s runway shows, we constantly talk about how it is a palate cleanser. Not to say that it’s boring or banal because the beauty of every Hermès show is that there’s always something old, new or joyous to be found. The old can be found in one’s wardrobe, Véronique Nichanian’s designs for the House have always been rooted in reality which in turn, either inspires one to rethink what he already has in his wardrobe (reuse, remix and retry) or make his way to his nearest Hermès boutique. The new is in how Nichanian herself is constantly thinking about what we call micro gestures —  small little details to pieces that can turn something simple into sublime.

The joyous elements, however, and in particular at the Hermès Men’s Summer 2023 show, comes from its solar palette and what psychologists call dopamine dressing. Put something on that looks good to make you feel good. 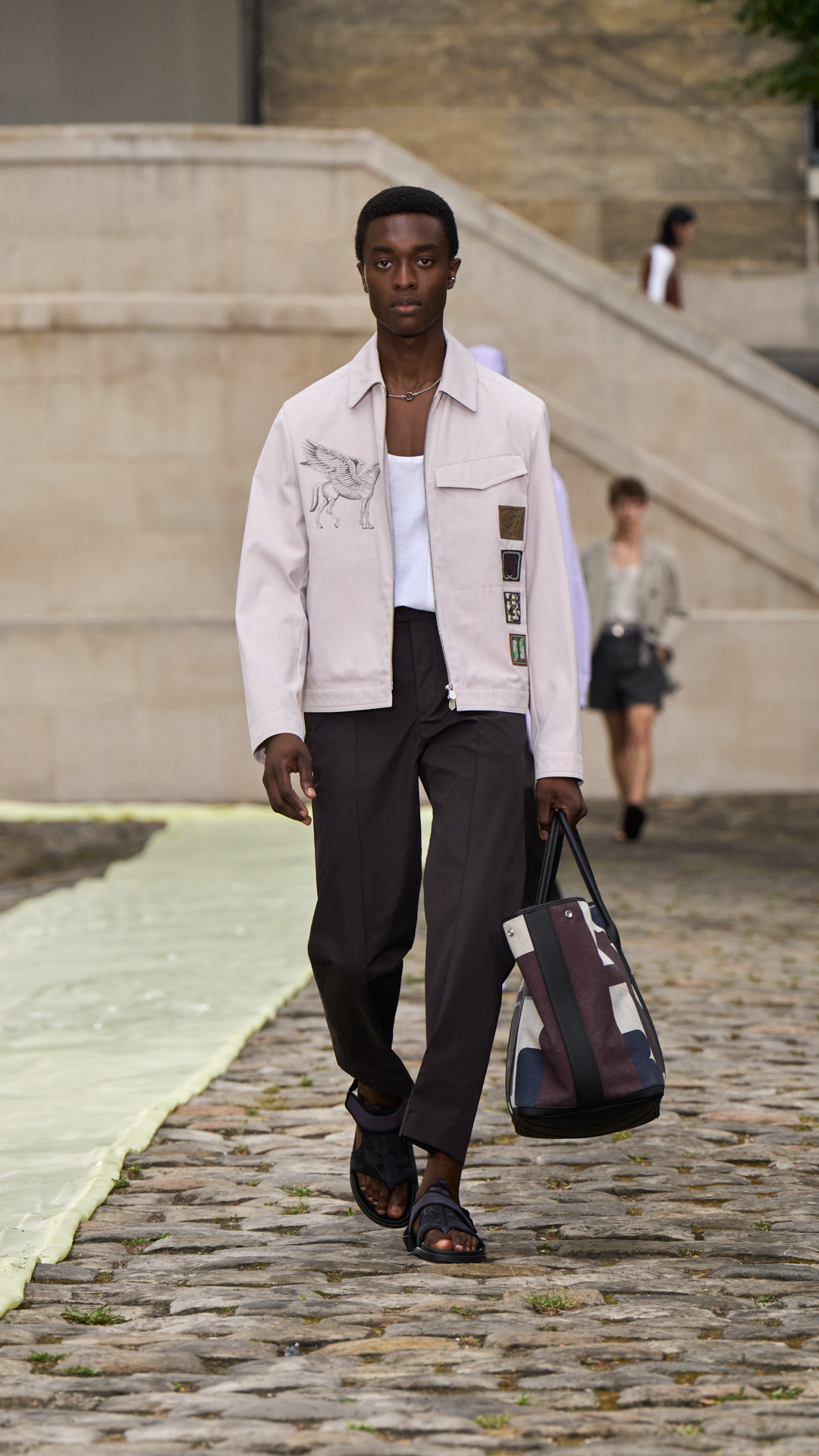 While the press notes have dictated the season’s colours — lemonade, lagoon, lilac, bubble gum, melon, amongst others — and the it-accessories (make a call to your SA to book the Bolide Good Vibe and the Haut à courroies bags), once again, the beauty of the Hermès Men’s Summer 2023 is in the subtle gestures each look shows. You might already be able to cobble them together from your closet but then again, the magic of wearing something from Hermès itself is in the elevation of the everyday. 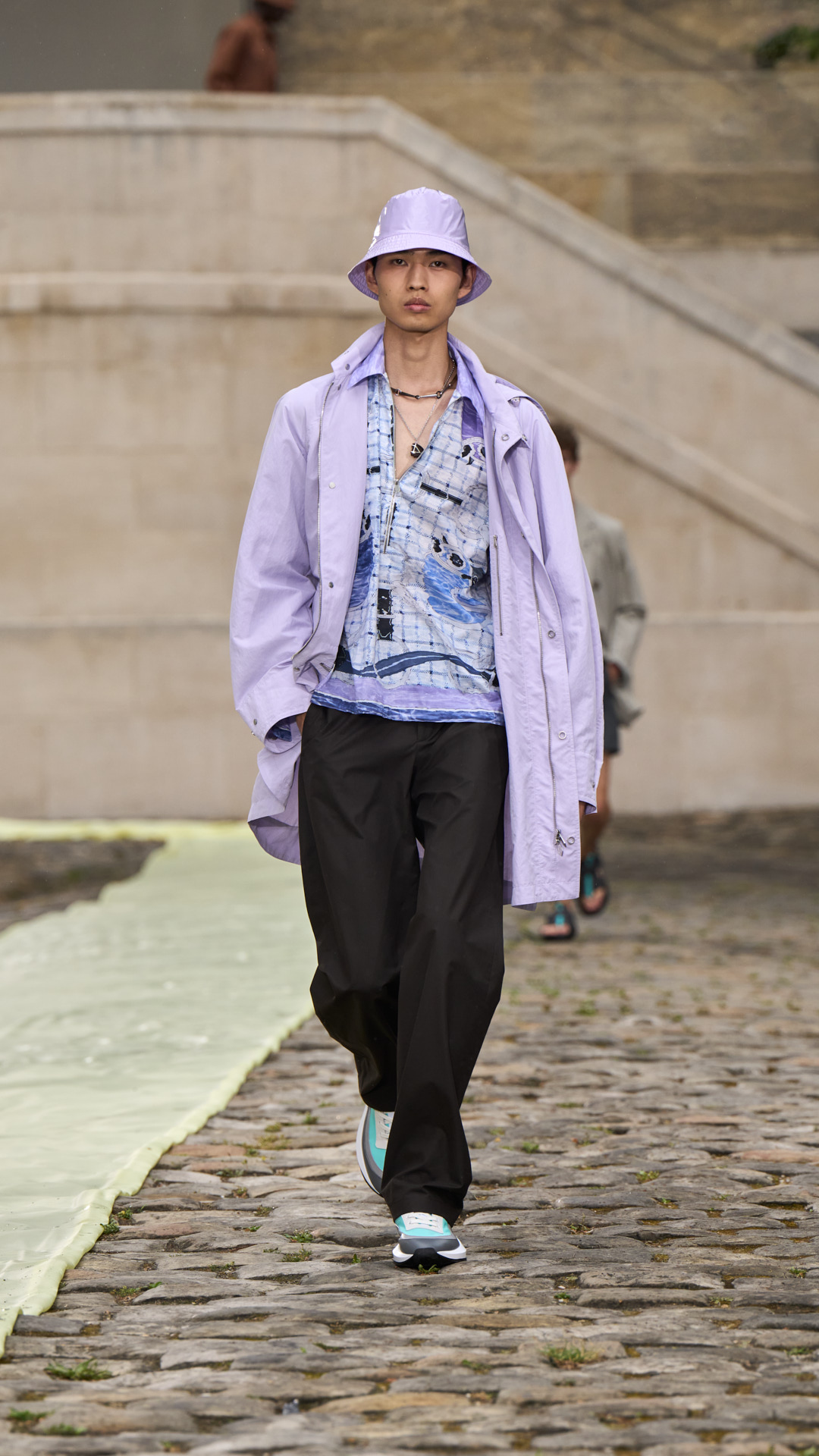 Look 6: Nichanian takes an image of something we often don’t notice and puts it in the spotlight — the shimmering tiles of a swimming pool in the hot summer sun. 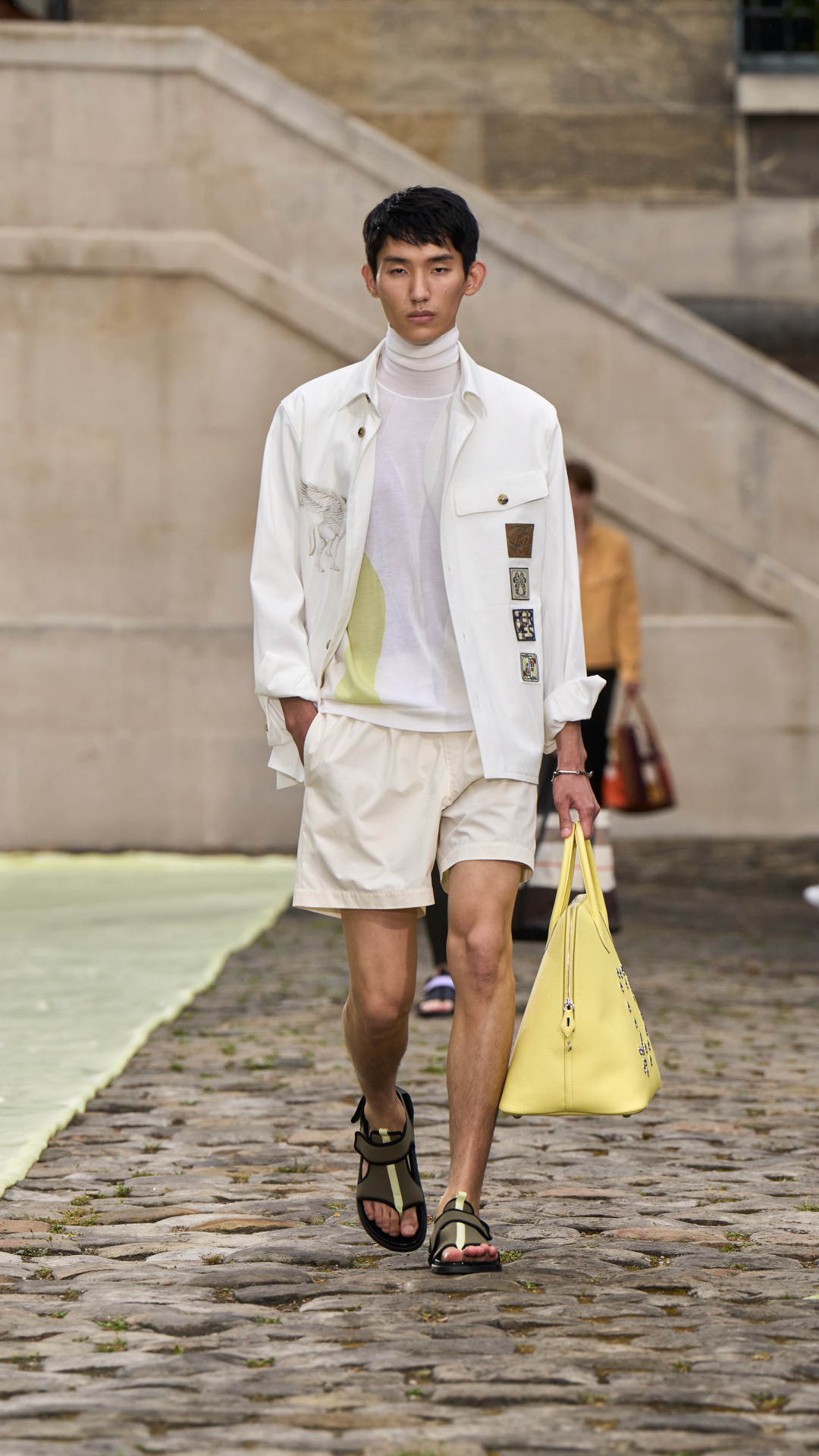 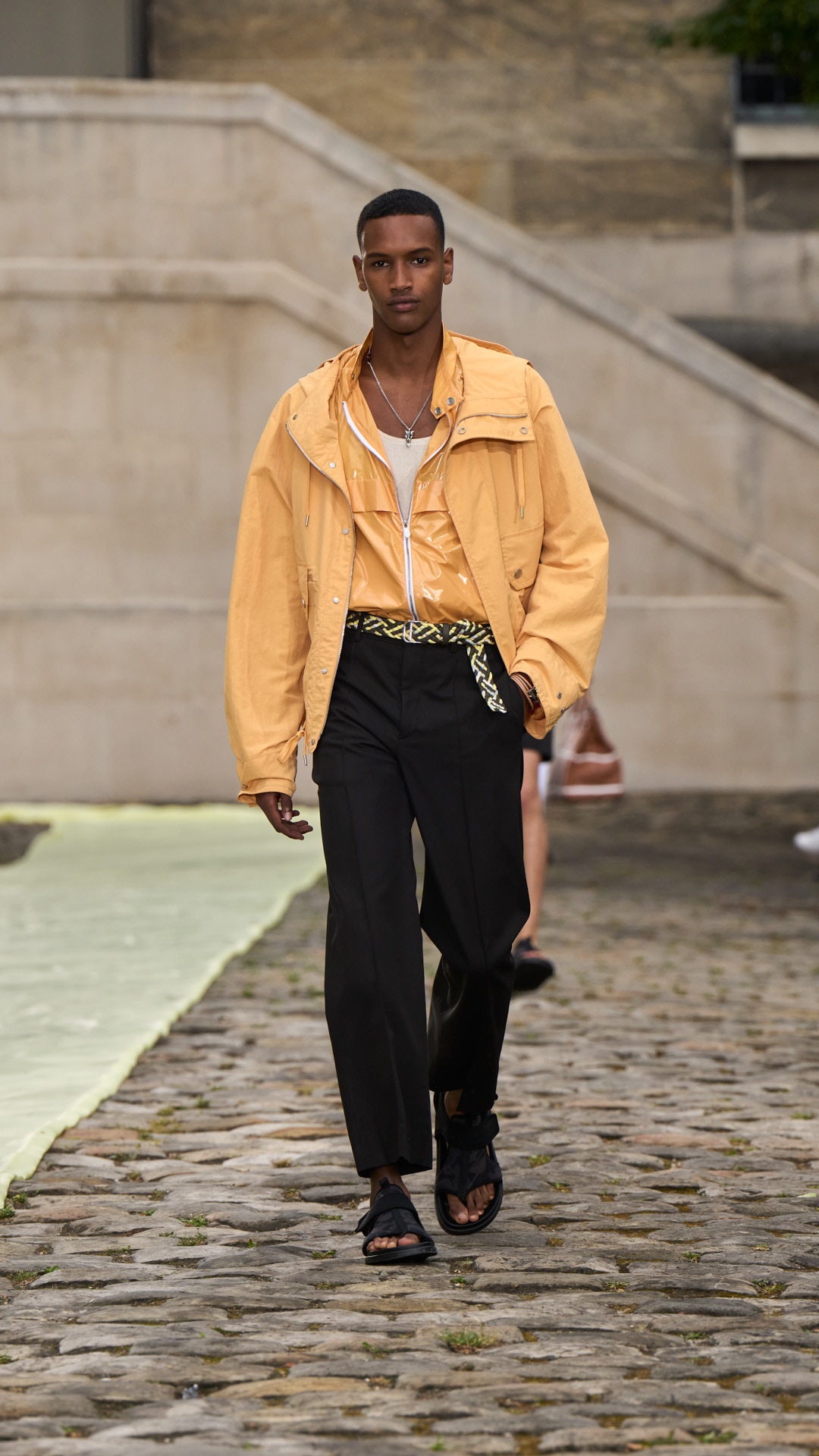 Look 14: The colour melon becomes less saccharine when used on something serious: a parka that provides some punchiness to tailored trousers. 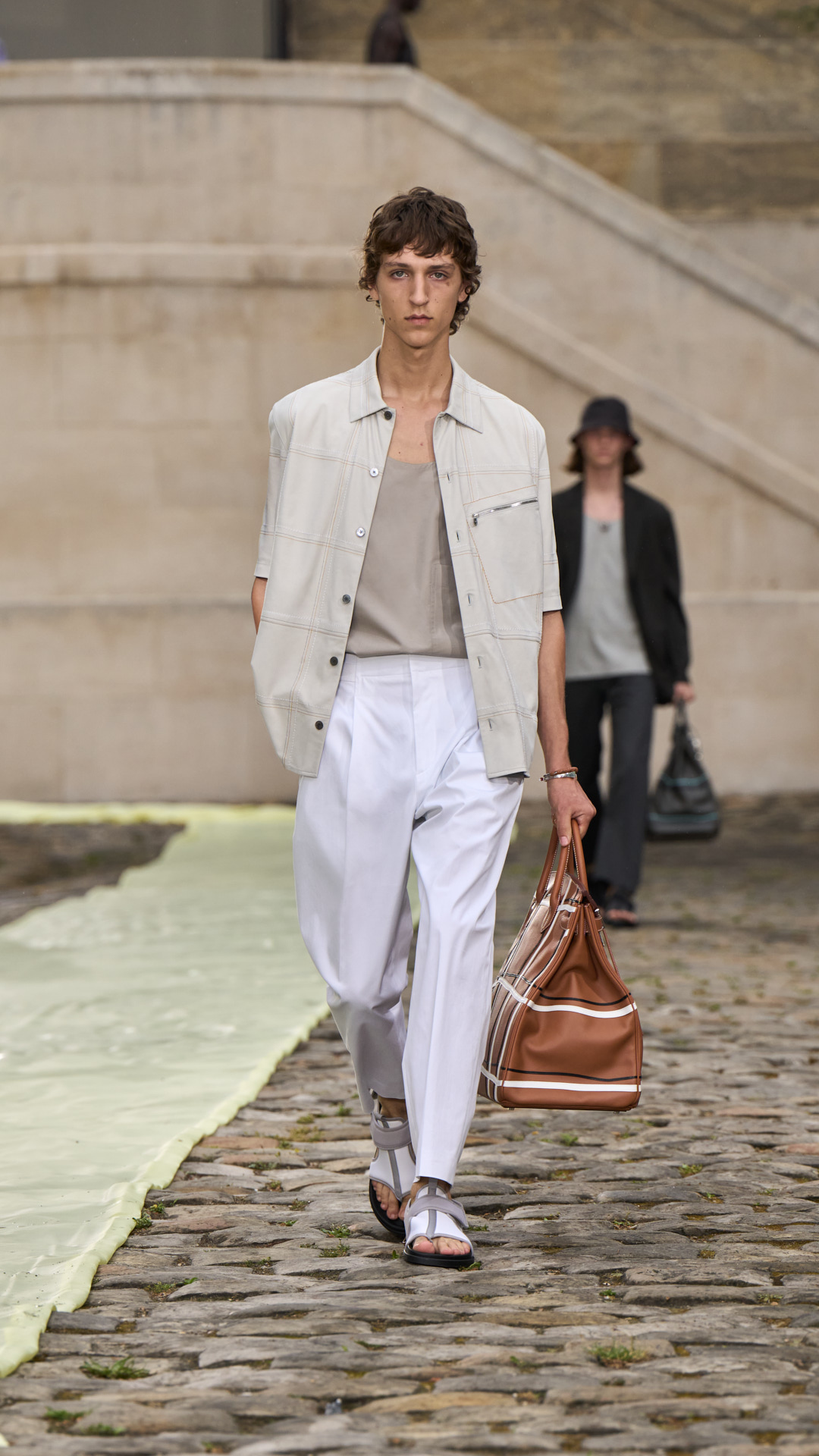 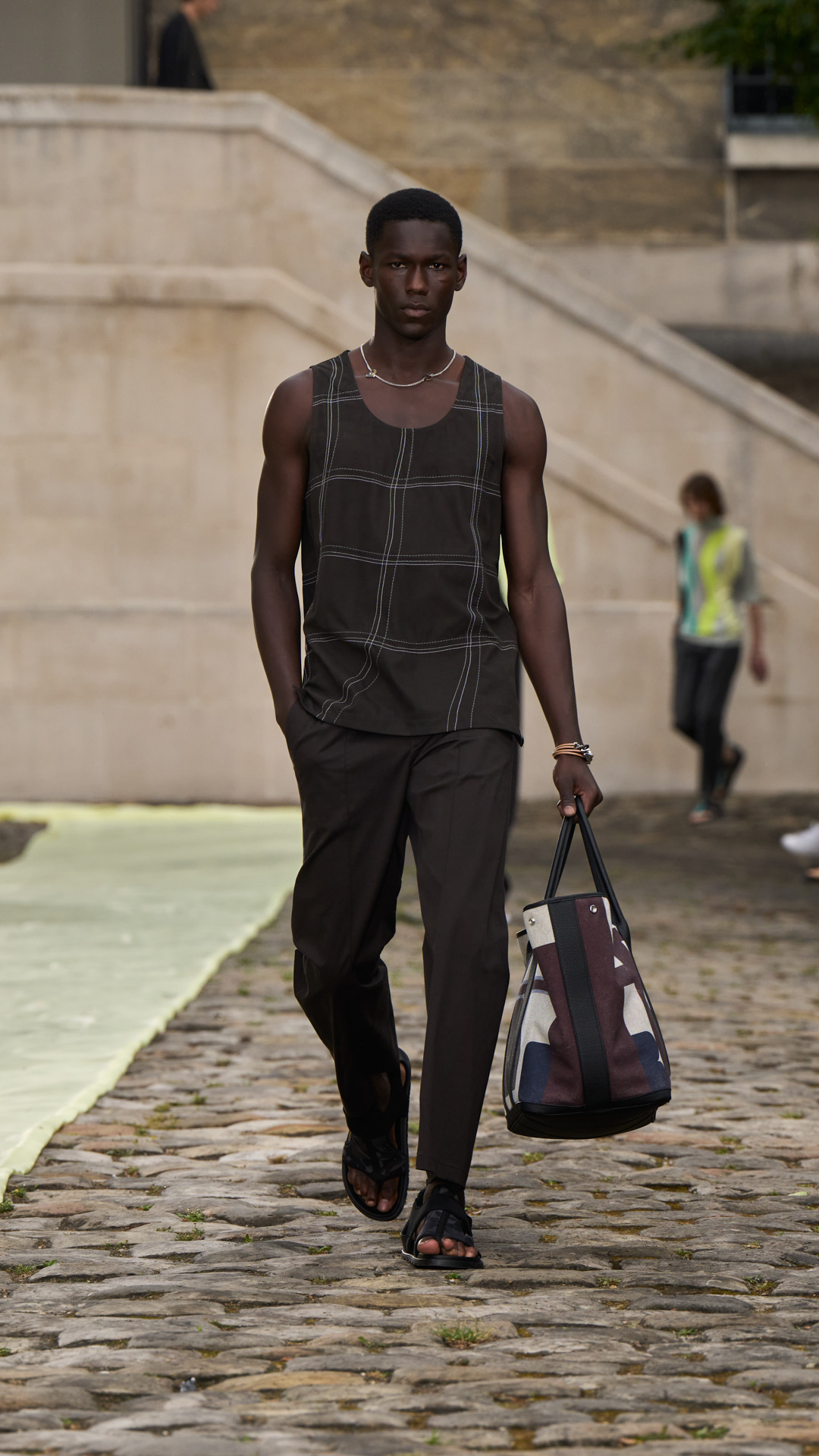 Look 19: The Summer staples — the tank top and tailored trousers combo. The sandals will keep one literally cool: they’re made of a neoprene canvas. 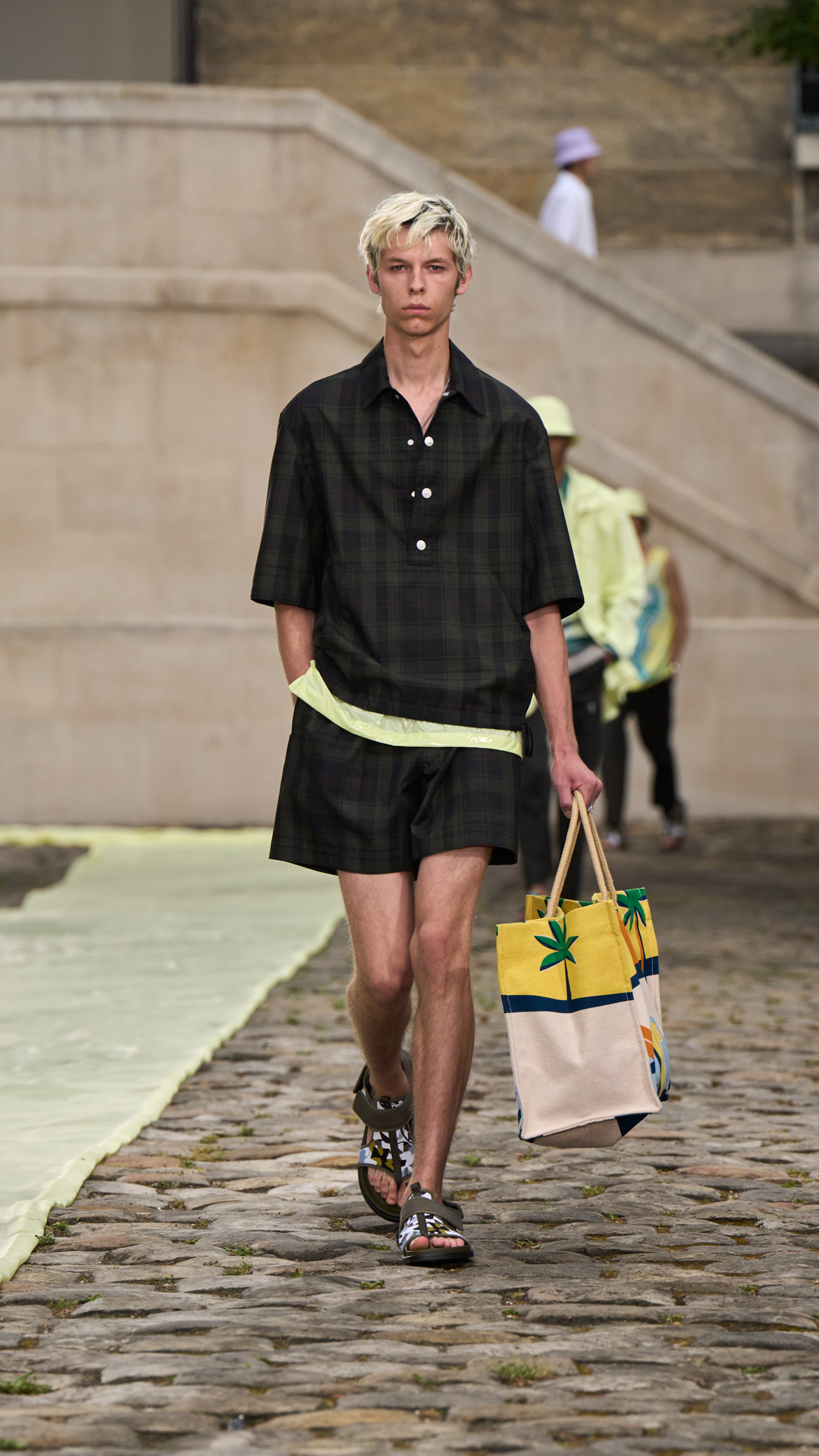 Look 24: The print of the season is called Après la vague which translates to After the Wave. 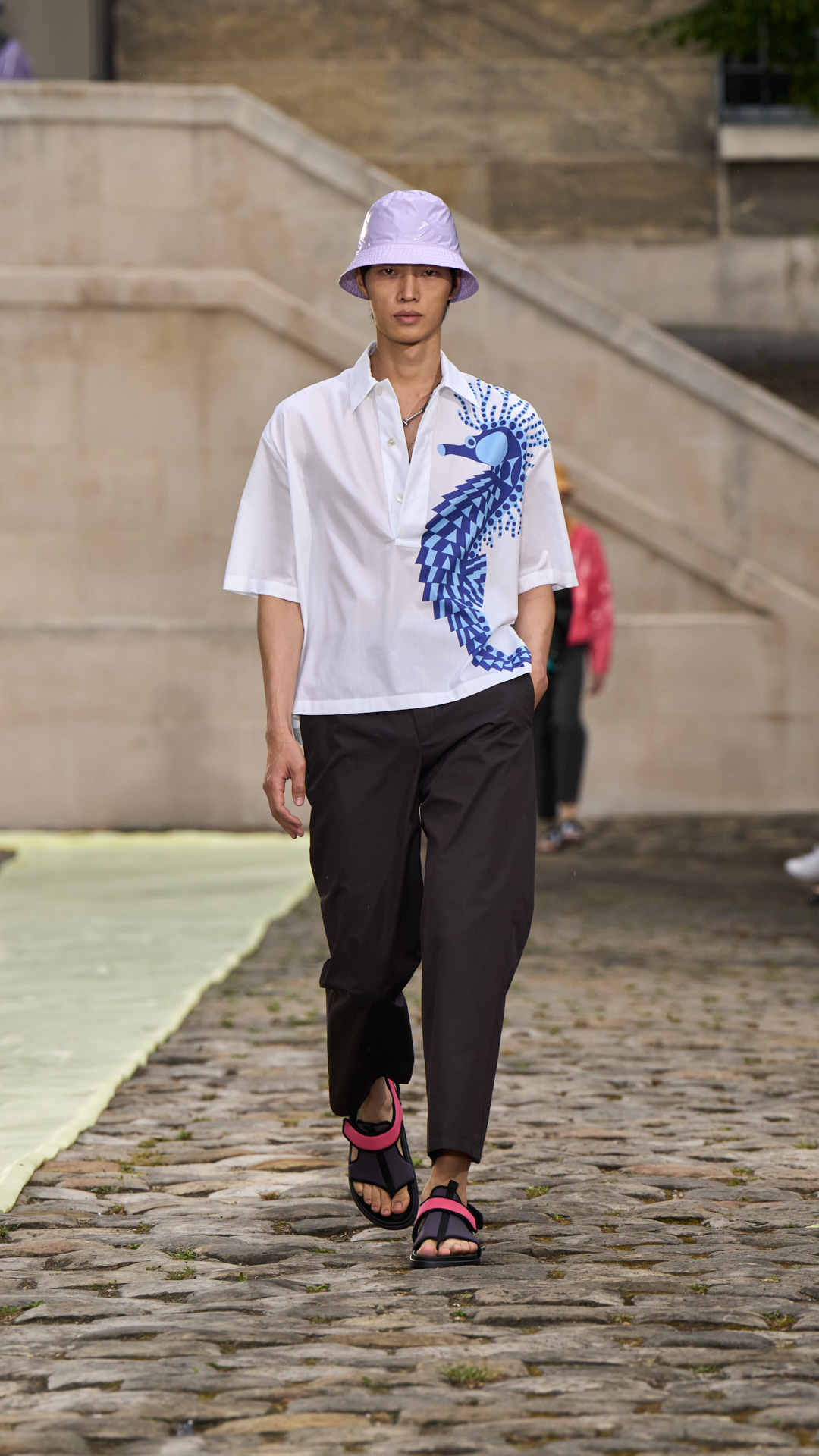 Look 27: Something so cutesy becomes quite cool under the eyes of Nichanian herself. 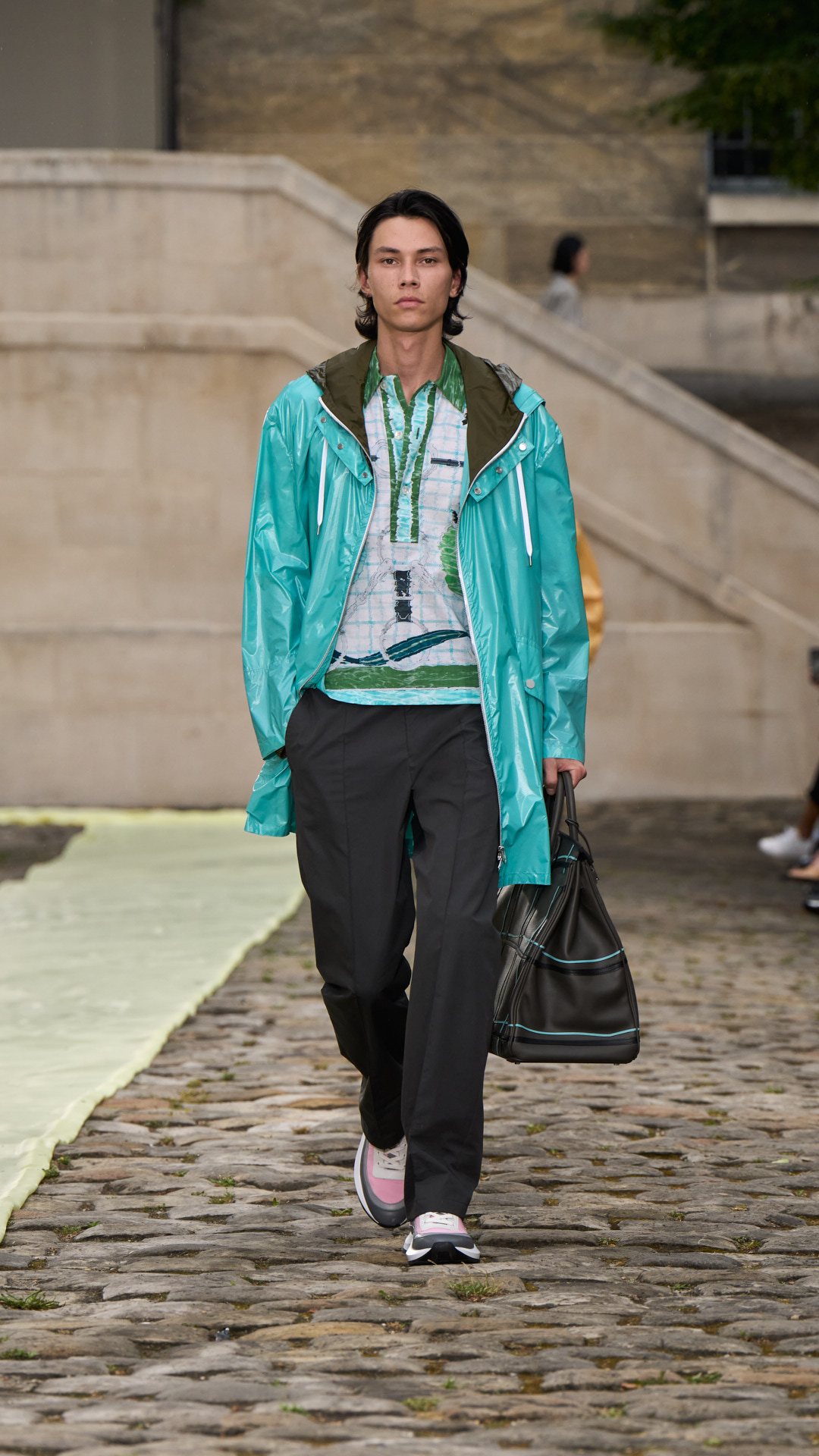 Look 32: In true Hermès form, the colours of the Men’s Summer 2023 ricochets like a kaleidoscopic light show. This one above is called lagoon. 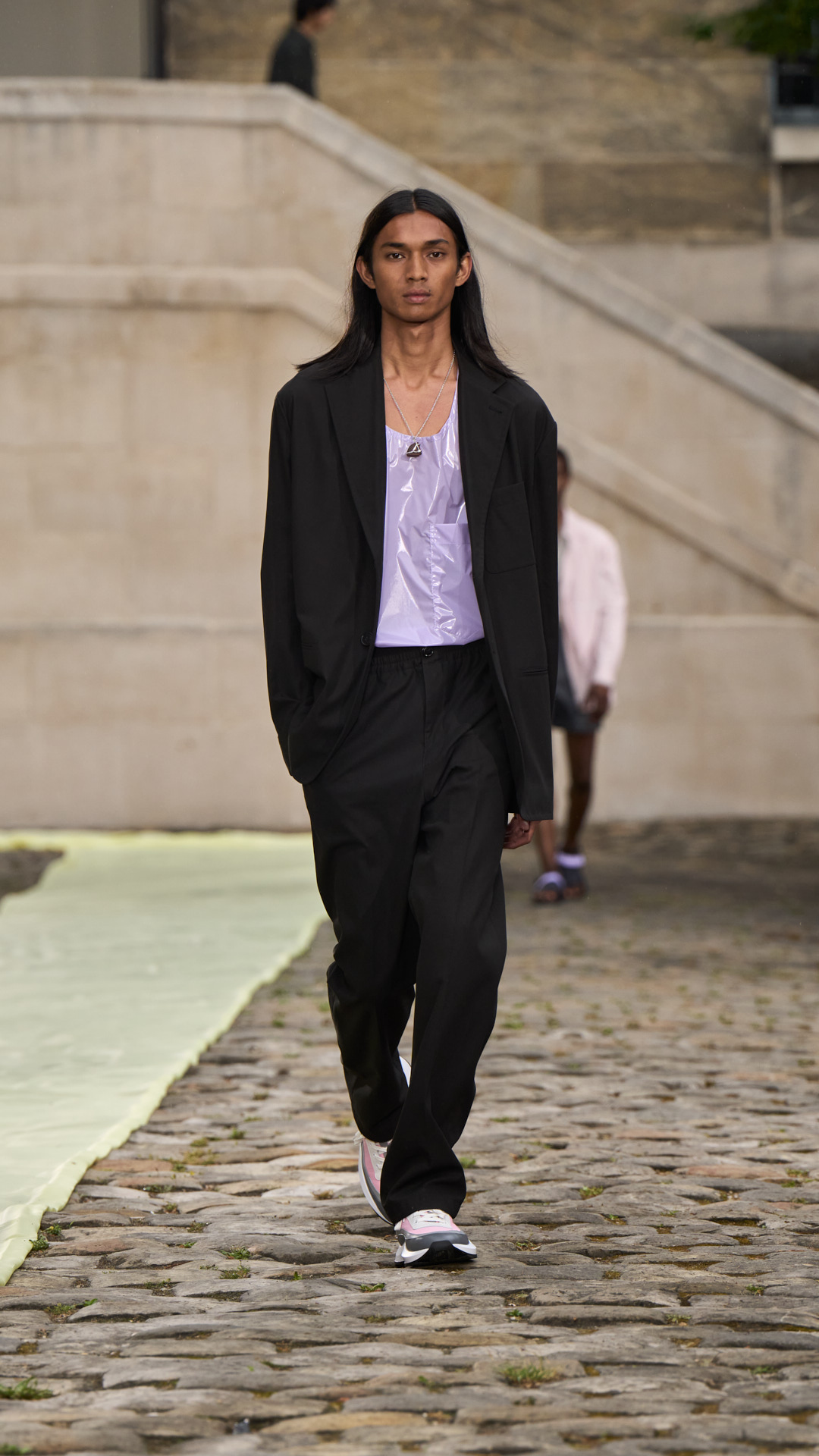 Look 44: An example of the micro gestures we mentioned — the sharp and notched lapels of a blazer, the semi-reflectiveness of a tank top, and grooved soles of sneakers. 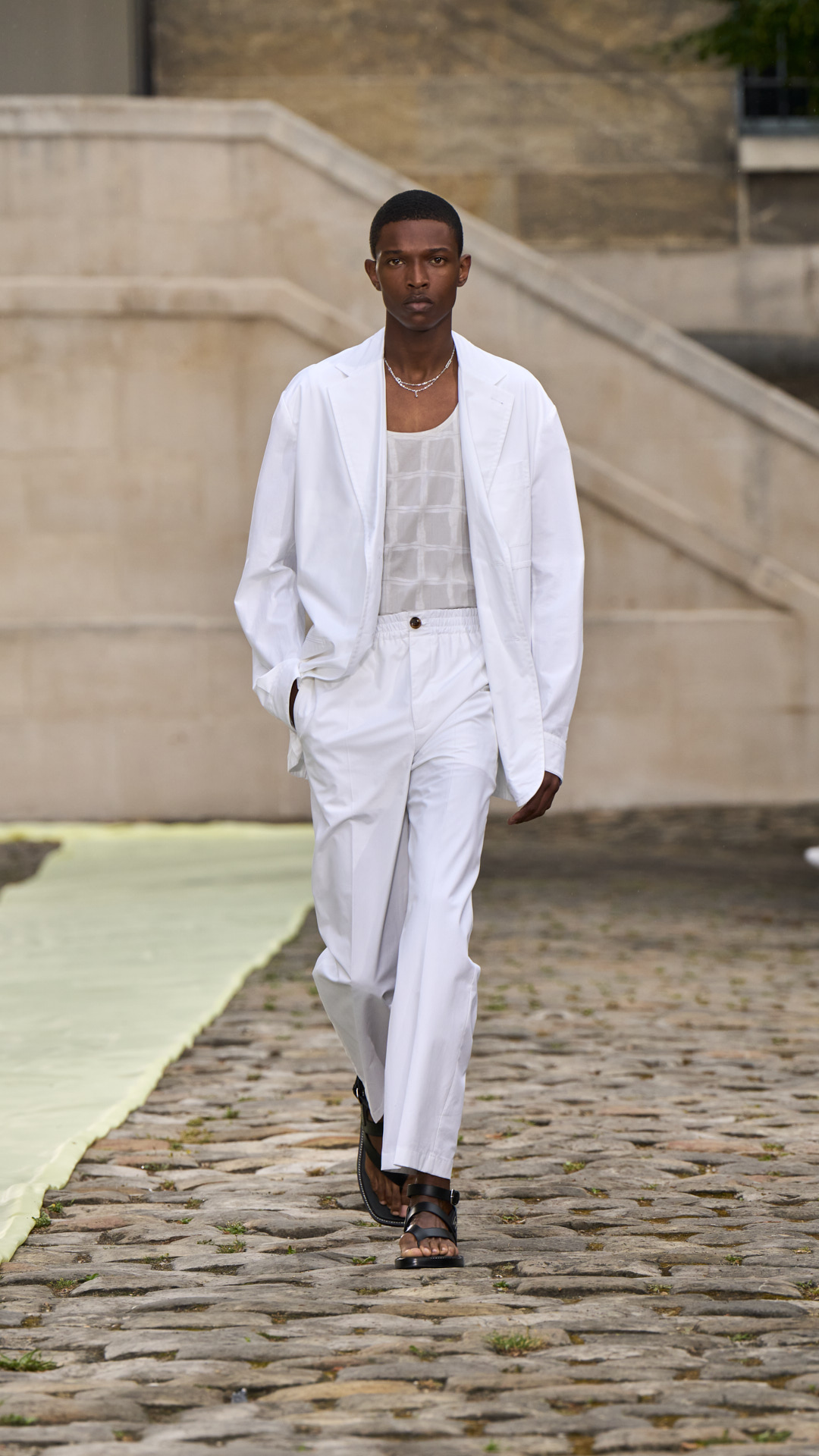 Look 53: The trope of every Hermès show is that its final look summarises the entirety of the collection itself. For the Men’s Summer 2023 show, the exit is an optic white look for one to cast his own sartorial habits onto.


8 eye creams and serums to fix your flaws