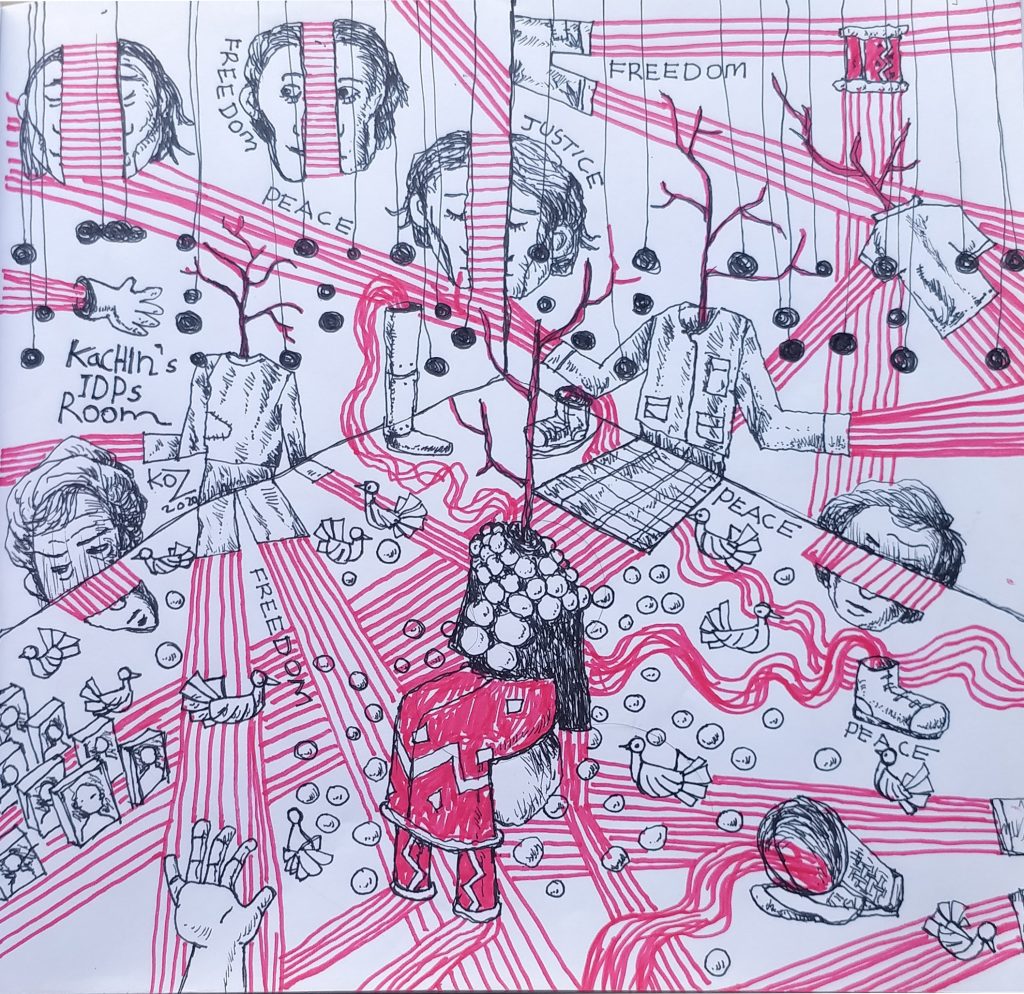 Ko Z belongs to the Kachin ethnic minority who lives in the northernmost State of Myanmar. His original name is Zahkung Hkawng Gyung, Zahkung being a clan name. The Kachins were animists and believed in spirits called nats before being converted, by American protestants and European missionaries in the 19th century. Today most of the Kachins declare themselves Christians but are still imbued with their traditional beliefs which they strive to keep alive through cultural festivals.

The Kachin state has a long border with China. In addition to its strategic location, the Kachin state is rich of many natural resources, which include Jade, gold mines, timber and hydropower. Since the independence in 1948, the Kachin population has endured a long state of civil war as well as many internal displacements of persons (IDP). The ceasefire agreement, which was maintained from 1994 to 2011, broke down after the Myanmar military launched a surprise offensive in June 2011. Since then, 100,000 people have been displaced. 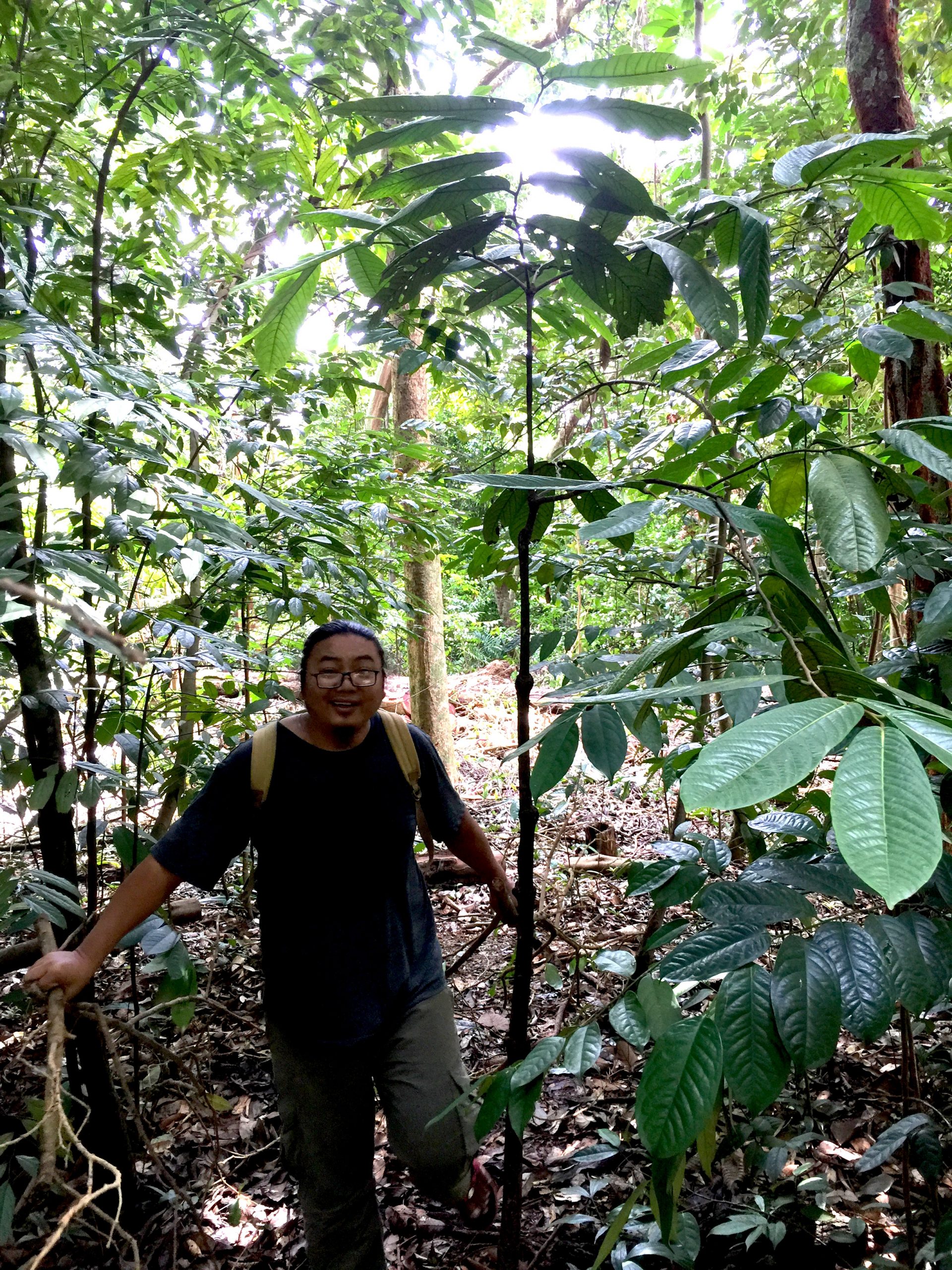 You were born in 1973 in the southern Shan state of Taunggyi in Myanmar and educated at the University of Yangon, tell us about your first steps as an artist.

I have enjoyed drawing and painting since my childhood. For me, there was not a day without drawing sketches, lines and characters. Thus it is quite natural that I ended up painting and creating artworks. It is a passion and a fascination for me.  Art provides me a full sense of freedom both mentally and physically. This is why I became an artist. When I am painting, I feel as if my mind is really flying, I have the same sense of freedom when I am getting ideas for the conception of an artwork. My first artwork to be exhibited was a huge 3m x 6m painting, created for an event organised  by the Kachin Baptist Association. This was in 1991 and I was only 18. From then on, I started working as a graphic designer and painter. I created another monumental painting in 1995 for the Centenary Kachin Literary Festival, which took place in Aung Pin Le, not far from Mandalay.

I have also been writing essays and poems and drawing cartoons since 1991. I had started my university studies at the University of Culture in Yangon but I quit before graduating because I was not satisfied with the curriculum. My first solo exhibition took place in 2005 at Lokanat Gallery in Yangon. The censorship was still very harsh and two paintings were banned. I started doing performance art the same year.

You belong to the ethnic minority of the northern region of Kachin, what influence has such background had in your art?

I was born in the Shan State, Myanmar, but I am 100% Kachin blood, all my relatives live in the Kachin State and I am imbued with my Kachin Identity. I live and work in Yangon since 1993 but visit the Kachin State several times a year. I think art does not have to be connected to racial or ethnic identity, any personal feeling being a possible source of inspiration. However, my identity has a strong influence on my artistic practice. As already mentioned, my two first major paintings were created for Kachin cultural events. In my paintings, I love using colourful patterns inspired by the traditional totem poles erected during the Kachin Manau Festivals. Moreover, most of my works are based on reflections on the Myanmar peace process and the situation in Kachin State.

You are known for your environment-friendly art, you actually use in your art and performances materials directly collected from nature. What led you to have such a strong respect for the environment?

I believe it’s in my blood.  My respect and love for Mother Nature is a heritage from my ancestors, it hails from my Kachin ethnic origin and from my childhood. Like most of the kids back then, I spent a lot of time in the nature and in the forests. I love nature life a lot, trees, grass, earth. I often use natural materials in my installation and performance art pieces. For Art Stage Singapore, I went to the Botanical Garden with Marie-Pierre, the owner of Intersections Gallery and after some negotiation with the rangers…. I was authorised to collect branches which I then painted and used  for the “Red Peace” installation.

Today, because of the humanity’ s greediness, the environment (the lands, seas, mountains, flora and fauna) are destroyed and devastated. Global Warming is getting worse and weather conditions have become erratic. I want to continue creating artworks to raise awareness about environmental issues. 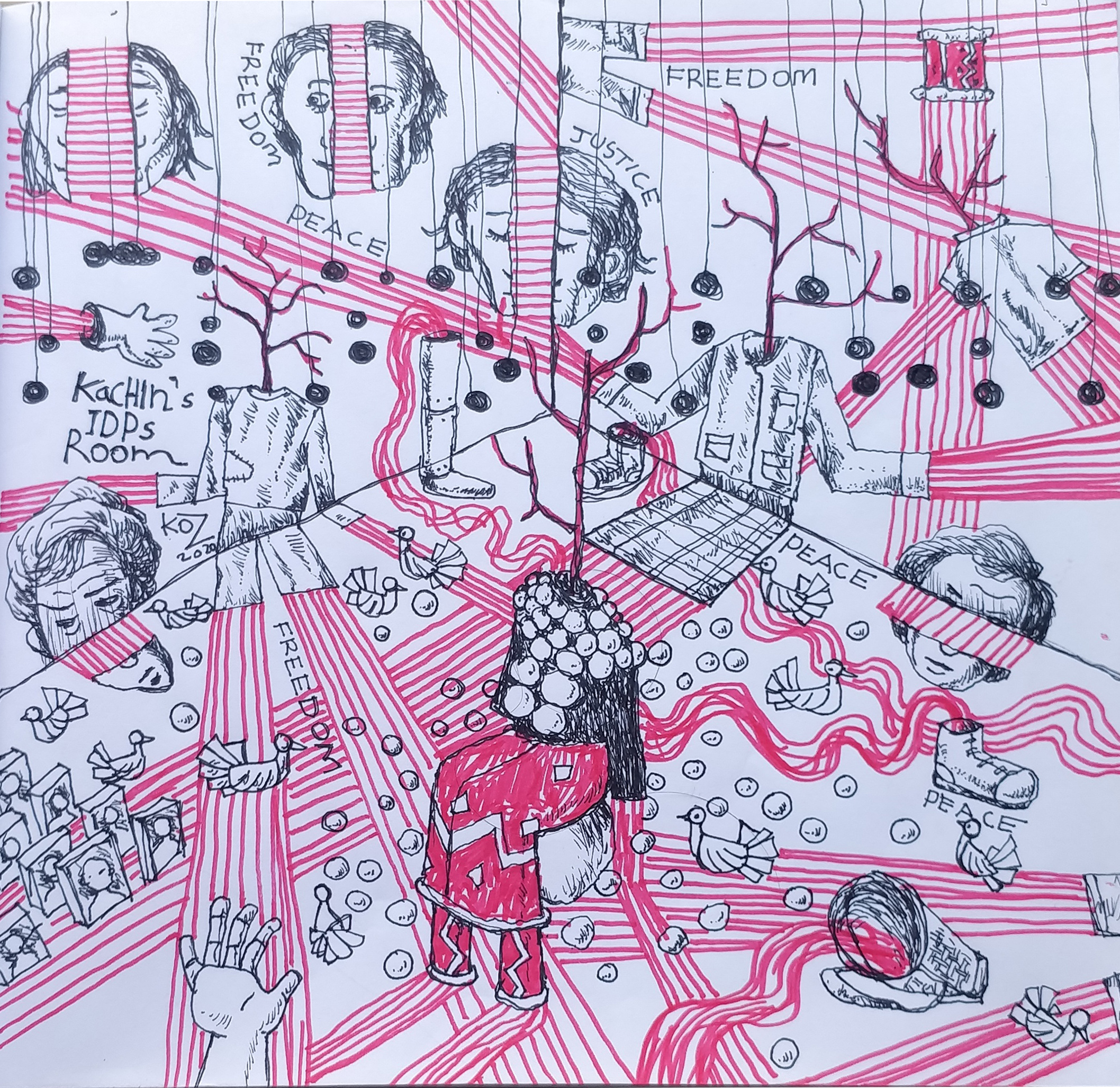 In 2009, you launched the Environment Art Movement in Myanmar, tell us more about it?

With an artist friend named Ko Ju, I created a group named “V30 Environmental Art Movement”. My objective was to encourage more artists, particularly those from the younger generation, to create art addressing environmental issues. Nearly twenty artists participated in this movement on a quarterly basis. We were going together in a forest near Yangon to create environmental art. Sometimes we organized “Natural art exhibitions” in galleries. We also initiated “Enviroformance Art” which is performance art addressing environmental issues. The word Enviroformance Art was coined by our group at this time.

What are 5 words which describe best your work?

When people tell you that your work reminds them of the “Cubist” period of Pablo Picasso and George Braque, how do you react? Does such influence resonate in you?

“KoZ is just KoZ”. I am neither influenced by Pablo Picasso nor George Braque. When I create art, when I am painting, I am influenced or possessed by the subconscious and my own artistic mind. There’s nothing else. My paintings since 2000 do not show similarities with any artists that I know of. I have been painting straight onto the canvas without any sketches to this day. This is a challenge which makes me feel free and fulfilled. 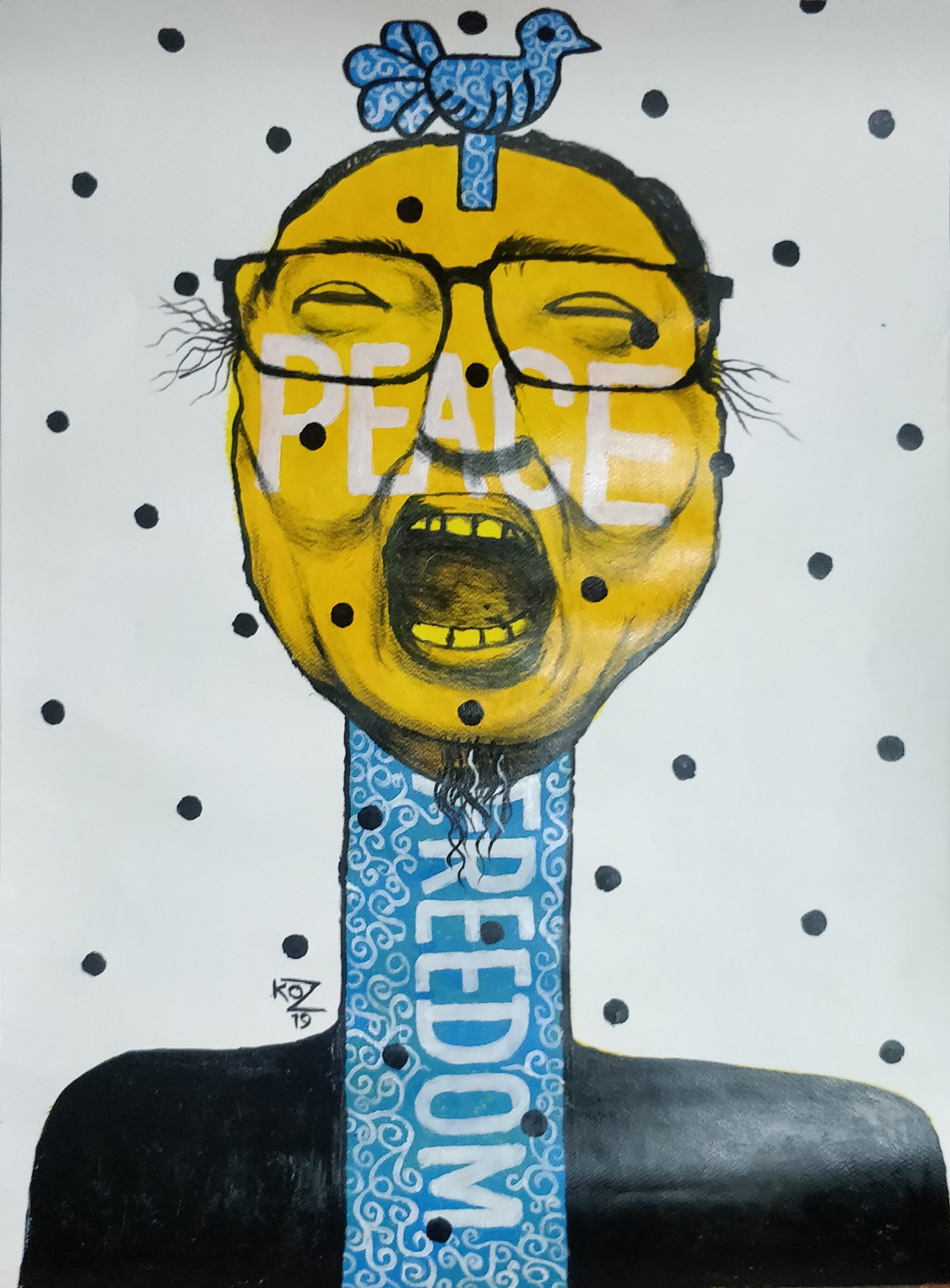 You have collectors around Asia and around the world. You exhibited in Singapore with Intersections Gallery, you exhibited in the USA, in China, in Thailand, and in Estonia. What does such recognition for your art inspire in you?

Having Collectors and being offered the opportunity to exhibit in group/solo shows all over the world is encouraging and gives me more faith in my art practice. I often get new ideas from these new experiences and contacts.

How important has the influence of U Aung Khin, often described as Master of Colours, been on the Burmese art scene over the past 40 years?

Aung Khin was a student of U Ba Nyan who introduced a new canon in Myanmar painting. However, Aung Khin developed  his own style by his choice of colours and brushstrokes. Like Khin Maung (Bank), Paw Oo Thet, and Win Pe, other artists who were his contemporaries in Mandalay, Aung Khin deeply influenced Myanmar painting.

What are your sentiments on the current art scene in Myanmar? You are close to many artists, how open are Burmese people to contemporary & modern forms of art?

The current art scene in Myanmar is a result of the efforts deployed by the previous generation of artists (the modernists). Painters like Kin Maung Yin, Khin One, Aung Myint and Po Po struggled to open new avenues for the younger generation of contemporary artists. Contemporary art would not have emerged without the efforts of the older generations. The current opening of Myanmar  also contributes to the evolution of the art scene. Artists are increasingly involved in international art events and movements. This is a good sign. Many young artists with a strong passion for art and a good knowledge are enjoying and contributing to the vibrancy of the contemporary art scene. Artists involved in street art crews, like Wunna Aung, Thu Myat and Bart Was Not Here, are creating new art forms. My opinion is that Myanmar has a bustling contemporary art scene which will continue growing.

When and where can we expect to see your next solo exhibition? Will it be more of an art performance? Let us know more there.

I have a large Installation Art project named “Kachin IDP’s room”. I’m not sure yet where it’s going to be showcased. I have ideas for a performance art piece as well. But I don’t know which one will come first. For the time being and with all the restrictions due to the pandemic, I am glad that Intersections gallery has offered to do an online exhibition of my recent works.

Where can we see some of you work online, are these for sale?

If you were to name one mentor who has inspired you in your life and path as an artist, who would that be?

However, if you allow me to mention one more name, I would like to mention, Lee Wen. For me, Lee Wen is one of the most significant performance artists in Asia. I got to know him from an art magazine not long after his famous performance art piece, “The Yellow Man”. I first met him online and only met him in person in 2017 when I participated in the Singapore Performance Festival. My performance took place at the Intersections Gallery which was nearby Lee Wen’s studio. Lee Wen had a big heart and we were friends.

What is your best memory of your exhibitions at Intersections gallery and at Art Stage ? Is there any anecdote you would like to share about these shows?

My participation in Art Stage 2018 was the opportunity to introduce the Kachin Contemporary Art Movement to the international art scene in the way I had envisioned it. This was the first time in my life that I had two solo exhibitions and one performance back-to-back. One exhibition titled, “RED PEACE”, took place at the Intersections Gallery, whilst the other one was placed at the Intersections booth at Art Stage Singapore 2018. The performance titled, “War”, took place at Gilmann Barracks as part of DISINI Festival. It was an exhausting but exhilarating experience.

All images from this interview were courtesy of Intersections Gallery.