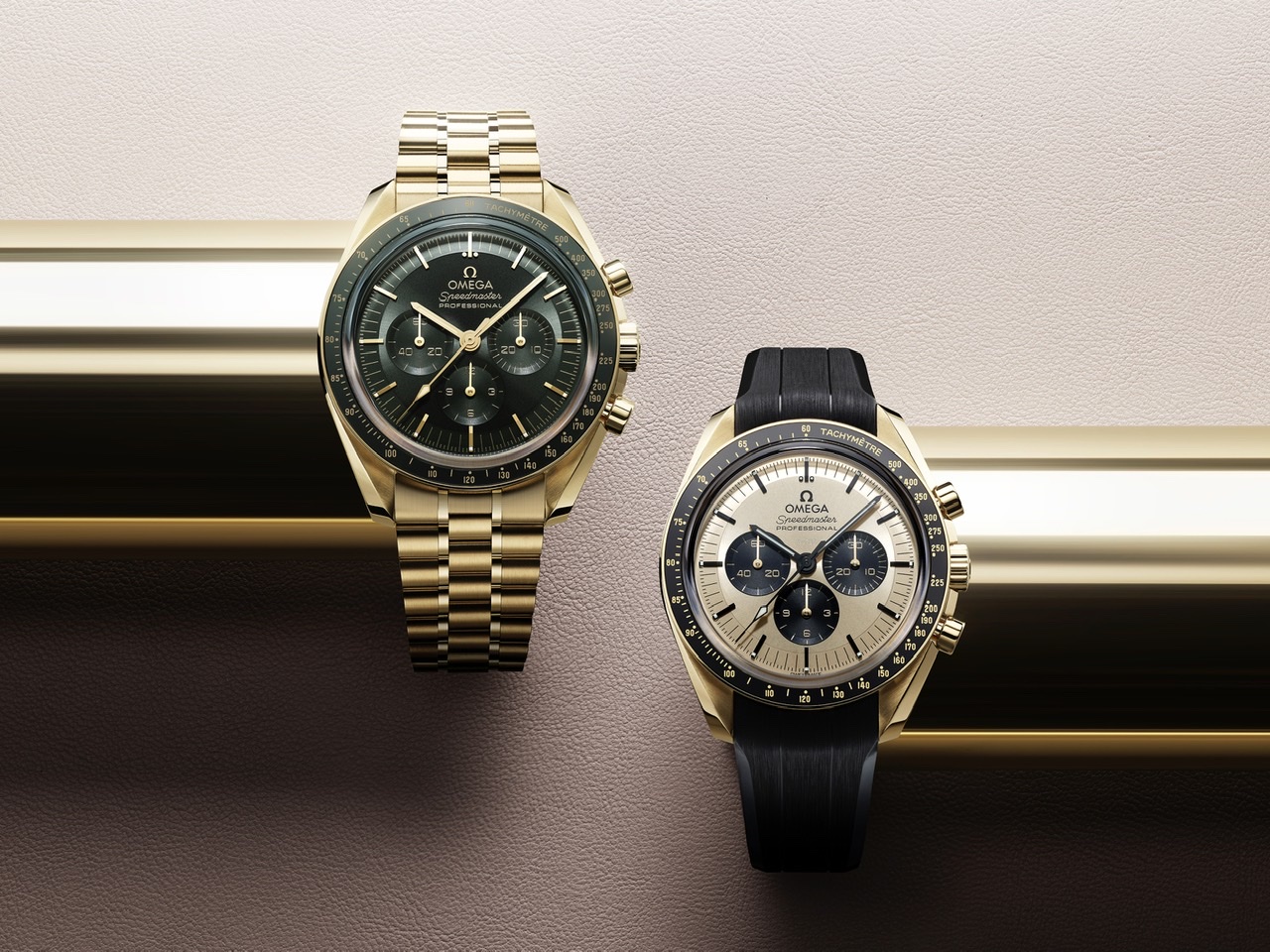 Watches & Wonders 2022 will come to its conclusion, with the entire Richemont group presenting their releases for the year alongside other watchmakers including those from LVMH and independent ownerships. Watchmakers, under the Swatch Group who are not participating in any trade shows at present, are joining in on the excitement as well, as they individually released their novelties over the past two weeks. These include household names such as Omega, Longines, Tissot, and more.

From ultra-performance to candy colours, Omega had plenty of surprises coming out of Bienne at the recently concluded Omega Days 2022. Refreshed additions are made to the core collections such as the Seamaster and Speedmaster as Omega flexes their watchmaking might for 2022. 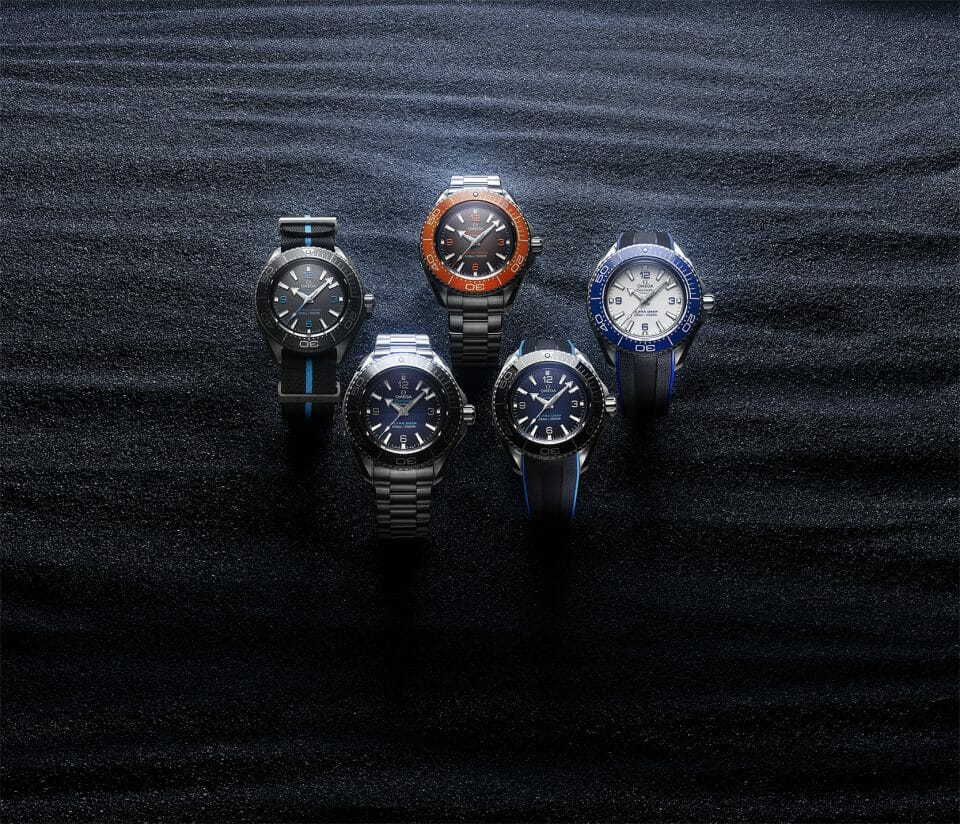 The highlight is undoubtedly reserved for the all-new Omega Seamaster Planet Ocean Ultra Deep as Omega gives new meaning to deep-sea exploration. Presented in a state-of-the-art design, the Ultra Deep is made to withstand crushing pressures with its 6000m water-resistant case. The release of the Omega Ultra Deep comes on the back of a trio of Ultra Deep concept watches that accompanied explorer Victor Vescovo on a mission to the bottom of the Mariana Trench in the Pacific Ocean. Piloting the DSV (Deep Submergence Vehicle) Limiting Factor, Vescovo managed to submerge 10935m deep, setting a new record for deepest crewed descent. A pair of Ultra Deep watches were attached to the vessel’s robotic arm, while another was strapped to a data-gathering unit. All three watches completed the 12-hour ordeal without a problem and surfaced completely unscathed.

That significant feat set the foundations for the Omega Ultra Deep as the collection is presented in either grade 5 titanium or Omega’s newest proprietary O-MEGASTEEL material. The former needs no further introduction as it is the go-to titanium grade for high-performance applications while the latter is a vastly superior steel alloy that encompasses Omega’s leading exploits in advanced material development. To ensure the structural integrity of each Omega Ultra Deep watch, Omega ocean-tested them in the Mariana Trench at depths of 6269m.

A special case design is afforded to the Omega Ultra Deep Titanium as it features the unique “Manta Lugs” that were used on the Ultra Deep concept watches. The O-MEGASTEEL pieces feature the conventional lug designs that can hold either a steel bracelet or rubber strap. All pieces are finished off with a ceramic bezel with Liquidmetal dive scale, a case back with special specification engravings and the Omega Co-Axial Master Chronometer Calibre 8912 certified by METAS. 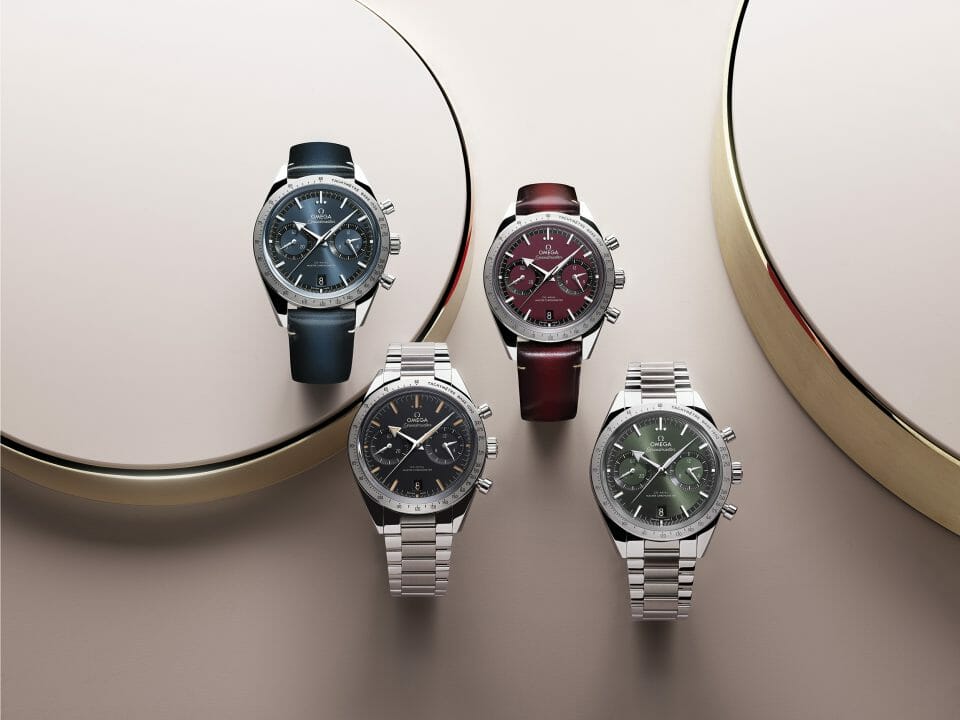 Colours take centre stage for the Omega Speedmaster ’57 Calibre 9906 and Omega Seamaster Aqua Terra 150m as Omega decked the dials with eye-catching shades. First debuted in 2013, the Speedmaster ’57 returns with a massive update as it is outfitted with a Master Chronometer movement. The manual winding calibre allowed Omega to reduce the case profile of the Speedmaster for a sleeker and streamlined look. A “sandwich“ black dial edition with recessed hour markers filled with vintage Super-LumiNova is available for faithful recreations while the blue, green and varnished burgundy dials offer a touch of fun to an otherwise serious watch. 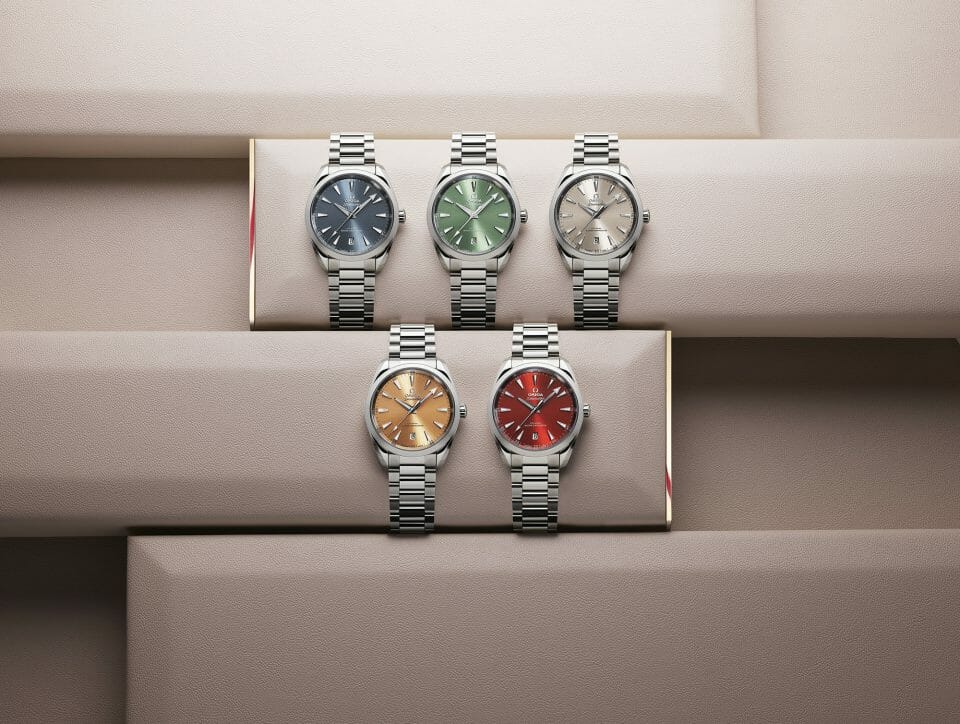 Similarly, the Seamaster Aqua Terra 150m 38mm is rendered in candy colours on their sun-brushed dials ranging from Atlantic Blue, Bay Green, Sandstone, Saffron and Terracotta. Smaller executions are available too with the Seamaster Aqua Terra 150m 34mm and its alternate range of dial colours in Sea Blue, Lagoon Green, Sandstone, Shell Pink and Lavender. All models are cased in fully polished stainless steel and are paired with redesigned bracelets. Providing the power is Omega’s Co-Axial Master Chronometer Calibre 8800. 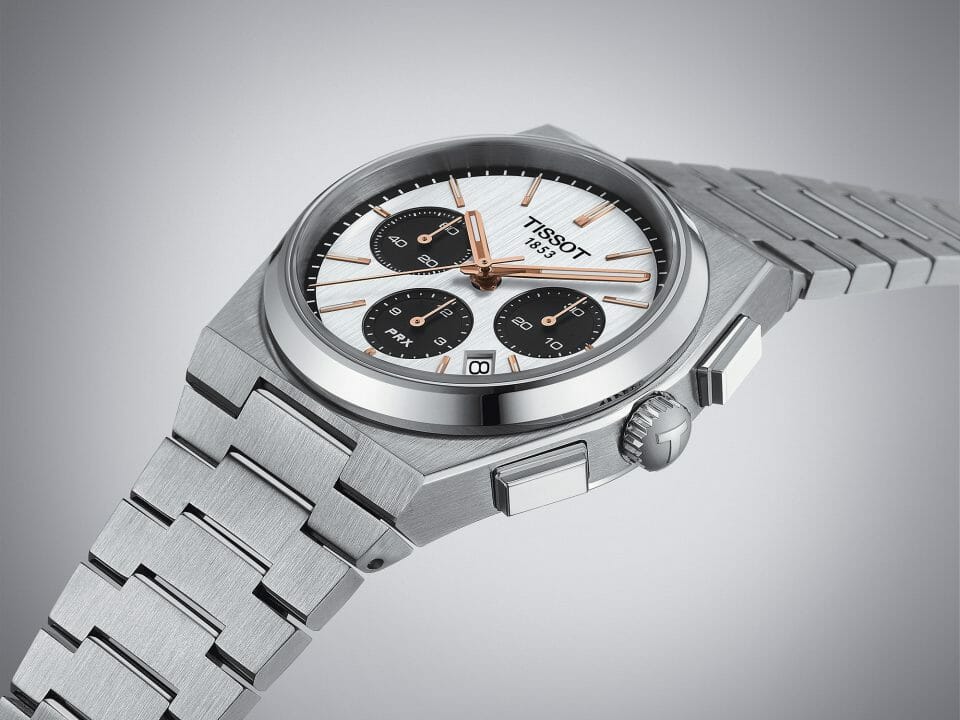 Tissot’s blockbuster PRX collection from last year is set to expand further with the introduction of three new iterations this year. The headline is undoubtedly reserved for the Tissot PRX Chronograph Valjoux as it is the first major complication added to the Tissot PRX collection. A Valjoux A05.H31 calibre will power the timepiece that will see case dimensions increase to 42mm to make room for the chronograph movement. A pair of Tissot PRX Automatic will be capped off with 18K solid rose gold fluted bezels as the PRX wades into precious metal territory. 40mm versions. The sunray brown or blue dials are purposefully picked to match the warmth of the rose gold. Expect colours to permeate into the PRX collection as the Tissot PRX Quartz 35mm recalls the zeitgeist of the original PRX reference from 1978. Made faithfully true to the original dimensions, the Tissot PRX Quartz 35mm opens up new possibilities for Tissot as it is presented in a genderless dimension. Four models will be presented in stainless steel cases with coloured dials while the fifth is clad in yellow gold PVD with a matching dial. 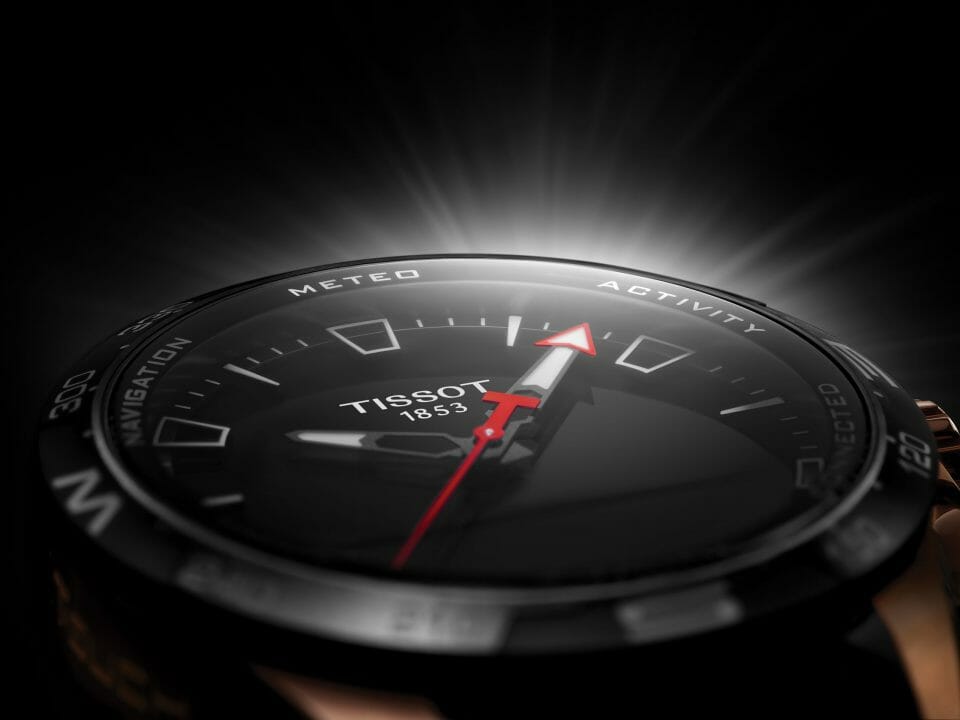 Tissot’s revolutionary T-Touch collection is back at the forefront as it releases the Tissot T Touch Connect Solar. New technologies and innovations promise to excite as an intuitive interface and highly functional considerations are packed into the connected watch. The standout features include real-time live score updates from the NBA and an upgraded cross-platform activity tracker amongst others. Struggles with battery life are a thing of the past with the SwALPS low energy operating system that runs on solar power. The power cell boasts six months of autonomy and charges whenever it is exposed to light. 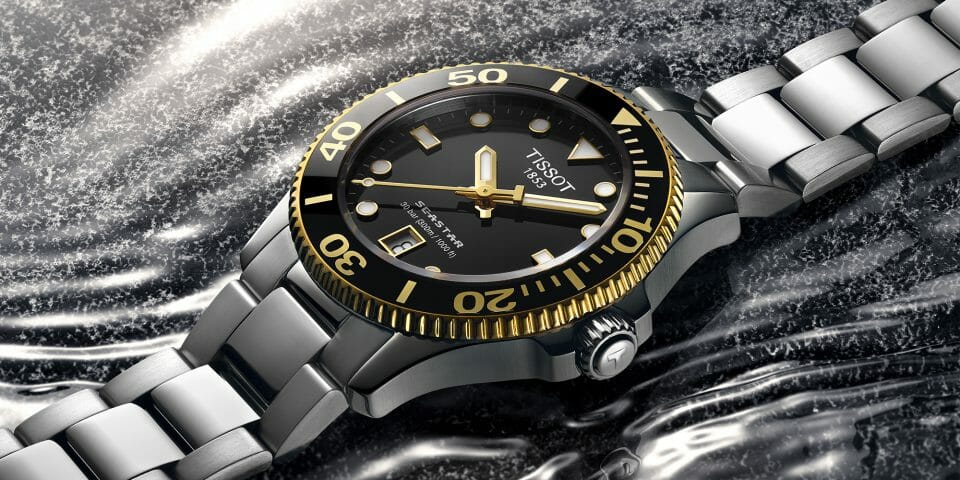 Tissot’s seafaring Seastar collection is not left out either as it too receives the genderless treatment. The all-new Tissot Seastar 1000 Quartz features an all-wrist friendly size of 36mm as Tissot firmly believes the thrill of adventure should be experienced by both genders alike. Three stylish colours of a black dial with yellow gold accents, a blue dial with silvery tones and a white dial with matching white elements are made available. Serious expeditions call for hardy tools and the latest Tissot Seastar 2000 Professional Powermatic 80 fits the bill perfectly. Made in accordance with ISO 6425 certification, the dive watch features 600m water resistance with a screw-down crown, an anti-magnetic Powermatic 80 movement, a ceramic unidirectional rotating bezel and a helium escape valve for technical saturation dives.

Feast your eyes on what is possibly one of the biggest collaborations for 2022 — the BIOCERAMIC MoonSwatch. Omega and Swatch join forces for a playful take on the iconic Speedmaster Chronograph, each named after planetary bodies in our solar system. The MoonSwatch will be cased in Swatch’s proprietary BIOCERAMIC that features a two-thirds ceramic and one-third castor oil derived-material composition for a sustainable take on watchmaking. From there, key Moonwatch design features are sprinkled in ranging from the asymmetrical case to the “dot over ninety” tachymeter scale and the distinctive Speedmaster subdials. The OMEGA X SWATCH logos are proudly emblazoned on the dial and crown while the battery cover on each watch features a depiction of its respective planet.

“Omega’s long and distinguished history may have been cut short if it wasn’t for the vision and the courage taken by Swatch. The MoonSwatch collection salutes the saviours of our industry in a witty and accessible way. The Swatches are perfect for budding Moonwatch fans and I can’t think of a more appropriate icon for our shared project. We went to the moon, now we’re exploring the whole Milky Way. They’re great watches, in fantastic colours and they make me smile,” says Omega President and CEO Mr Raynald Aeschlimann. 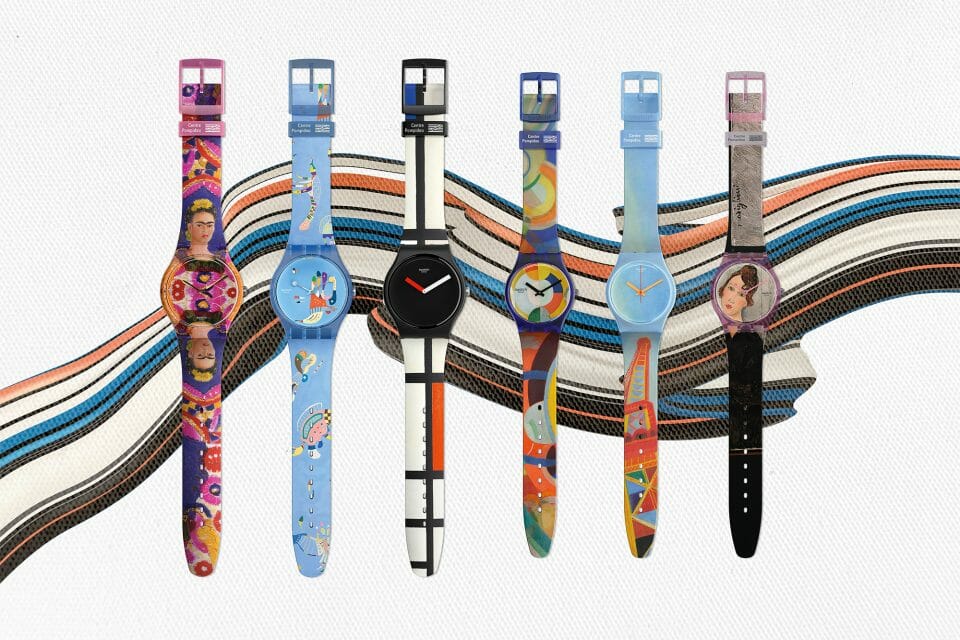 Time and art collide as Swatch joins forces with Centre Pompidou for an art-filled watch collection. Swatch needs no further introduction to the arts as the enfant terrible of Swiss watchmaking has numerous past collaborations with various artists and museums. The Museum Journey series which began in 2018 sees museums grant Swatch special access to bring their masterpieces to life and onto the wrists of many. The Centre Pompidou collection joins an esteemed company with the likes of the Rijksmuseum in Amsterdam, Thyssen-Bornemisza National Museum in Madrid, the Musée du Louvre in Paris and The Museum of Modern Art (MoMA) in New York featured in the past.

Swatch is no stranger to the Centre Pompidou as they have worked with the Parisian museum on two separate occasions featuring the work of Kiki Picasso in 1985 and Renzo Piano in 1999. This year, six iconic masterpieces such as the Portrait of Dédie by Amedeo Modigliani; Carousel by Robert Delaunay; Eiffel Tower by Robert Delaunay; The Frame by Frida Kahlo; Red, Blue and White by Piet Mondrian and Blue Sky by Wassily Kandinsky are reimagined as statement watches. Each artwork is carefully constrained into the watch, ensuring the proportions and balance are well represented throughout the collection. The packages feature a write-up of the artwork and in true Swatch style, an exclusive collector’s box set featuring all six watches is available.

Our Swatch Group Novelty Round Up takes us finally to Longines. With normalcy resuming and travel returning back to the agenda in the near future, Longines launched the perfect companion with the Longines Spirit Zulu Time. Inspired by the first dual-time zone wristwatch manufactured by Longines in 1925 which bore the Zulu flag, the Zulu Time is a GMT watch imbued with true GMT functionality. The automatic in-house calibre L844 allows the hour hand to be adjusted independently of the GMT indicator. Additional time zones are read using a 24-hour hand and a bidirectional rotating bezel also graduated over 24 hours. Further to that, Longines implemented a silicon balance spring for the movement for greater reliability and is chronometer-certified by the COSC (the Swiss Official Chronometer Testing Institute). Dimensions of the Longines Spirit Zulu Time have been increased to 42mm and feature a 100m water resistant stainless steel case and ceramic bezel. A choice of interchangeable steel bracelet or leather strap is available with the latter fitted with a folding clasp fitted with a new micro-adjustment system for maximum comfort and a perfect fit.