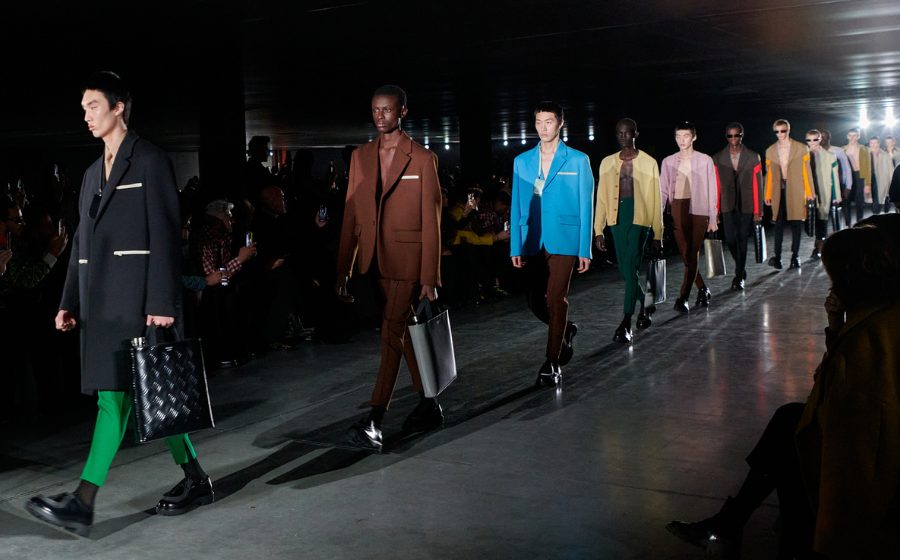 If clothes could speak, what would they say? Perhaps it can converse the pains of youths, whisper the colours of a generation, or murmur the bliss of innocence. An ensemble of clothes can tell a story just as well as poetry — from its use of colour right down to the choices of silhouettes; it paints a time, place, and a cast of characters that exist beyond the bare walls of show venues.

But in Milan, Miuccia Prada and Raf Simons chose a different prose for the Prada FW23 menswear collection — what happens when we talk about clothes instead?

At the heart of Prada, the voice has always been given to the artist and not the canvas. Therefore, the intention of the new collection is something that has long been utilised in the house. Miuccia Prada has perfected that sensibility for decades, having chosen to use clothes as tools to critique and investigate fashion — particularly with gender identity and roles — which often boils down to motifs that generate a sense of liberation in the frivolity of the fashion scene. Undefined by the clothes nor the trends of the season, it allowed Prada to become an institution to unrest fashion’s creeping desires. This feat has allowed critics to refer to the heiress’ works as unapologetically “ugly”. 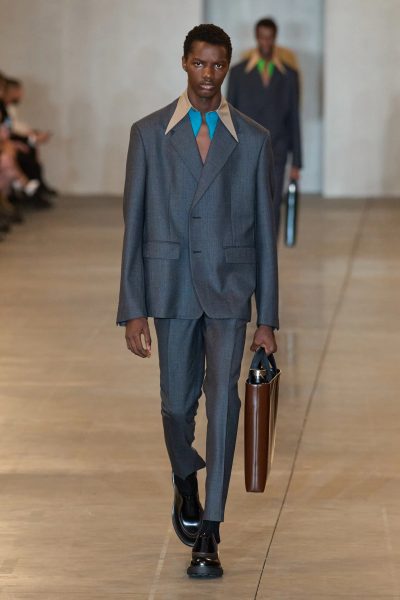 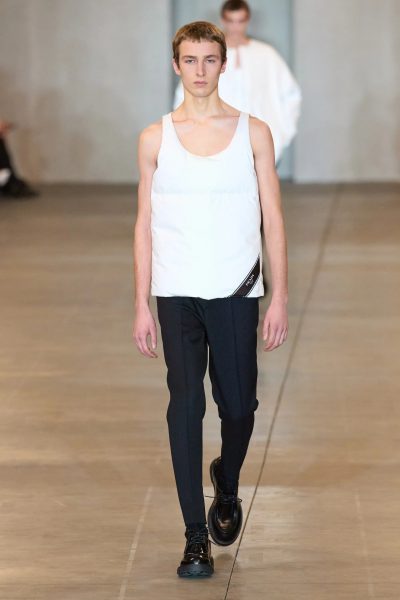 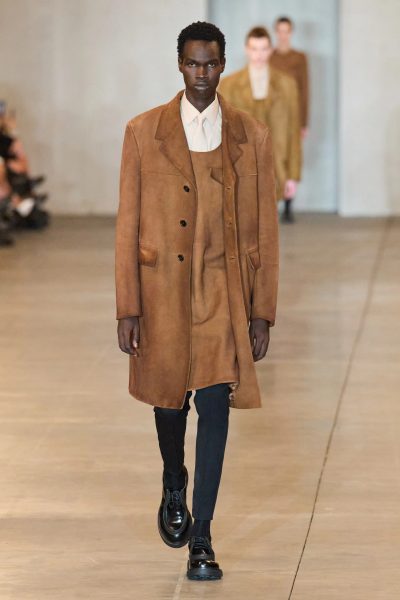 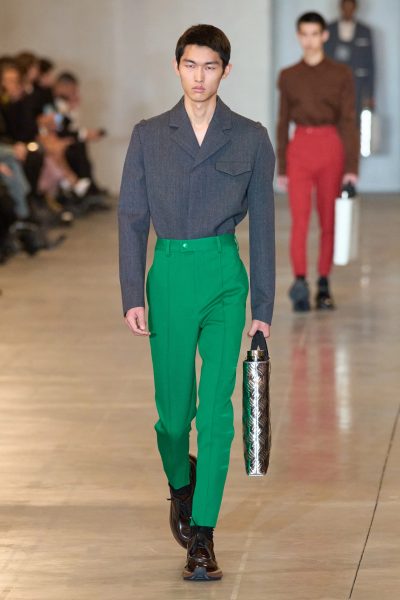 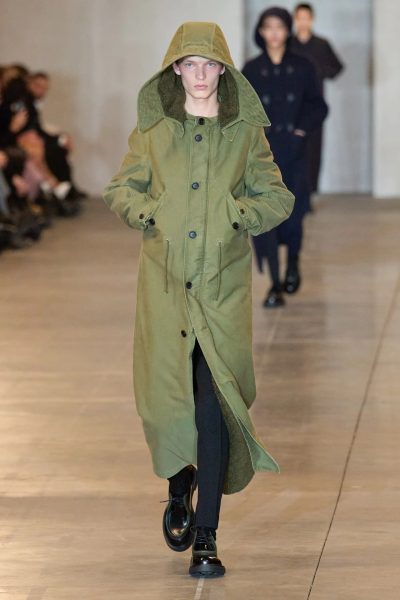 Meanwhile, at the contemporary state of Prada, Belgian-born designer Raf Simons now co-captains with Muccia for a conversation on clothes that echoes with a different sound. With Raf Simons’ innate creative impulse for a cross-breed between intellectuality and aesthetics, FW23 starts and ends with nothing that shouts — the collection moves along an eerily silent pace. Black, skinny tailoring repeats from start to end, only ever slightly changing with a few variations of collars peaking out or with the addition of coloured panels. The looks then move on to oversized bomber jackets that have been overtly packed with down-feather, small knit cardigans and padded vests, and a glimpse of men’s apron dresses.

It would be easy to trust that the collection appears intentionally bare. The objective becomes visible when one concentrates on the styling. The collection statement provided by the house notes that the collection sees “modernist precepts of reduction and simplicity combined with their apparent contradictions: comfort, exaggeration, and intimacy. Paradigms of fashion combined with paradigms of Prada, literal and ideological fragments of heritage inherited by new garments. Reductionist tailoring, graphic shards of print and knit, laid on bared skin.” Now that prints have been made obsolete, colours fail to inspire, and layers have been reduced to the minimum, this theory cites us to think: what must we do with clothes if it does nothing for us? 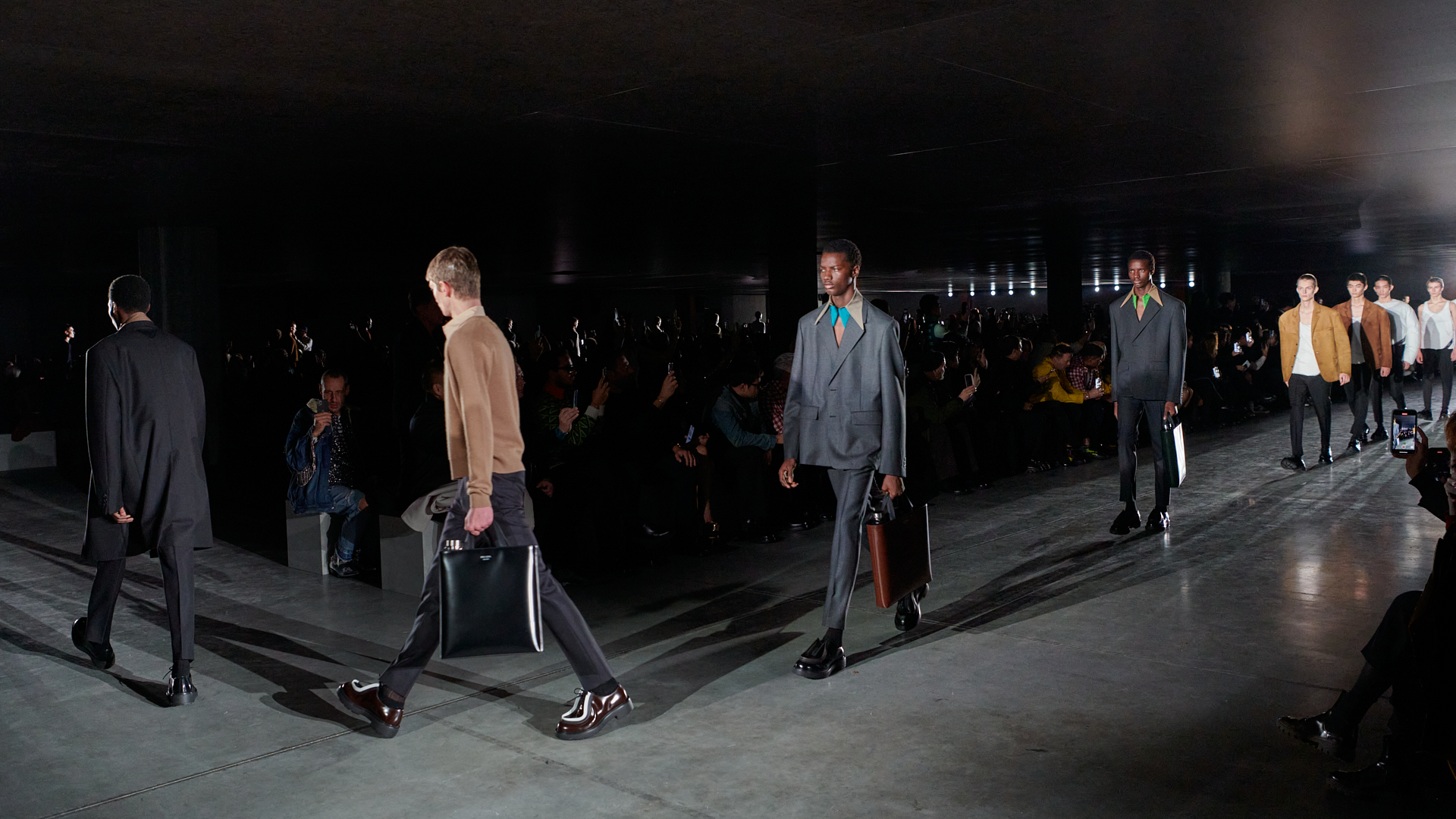 Make it your own, then. Fashion has longed convinced with the perception that clothes possess the power to change who you are. That influences your desires and encourages you to purchase items under its spell. Rarely do we ever think about what we can do with it when it is simple and reductive in its edit. That makes the new collection a blank canvas in our current arena of aesthetics contraction.

For the duo, it becomes no less a battle of how clothes can transform into anything so long as you allow yourself to think beyond the obvious.