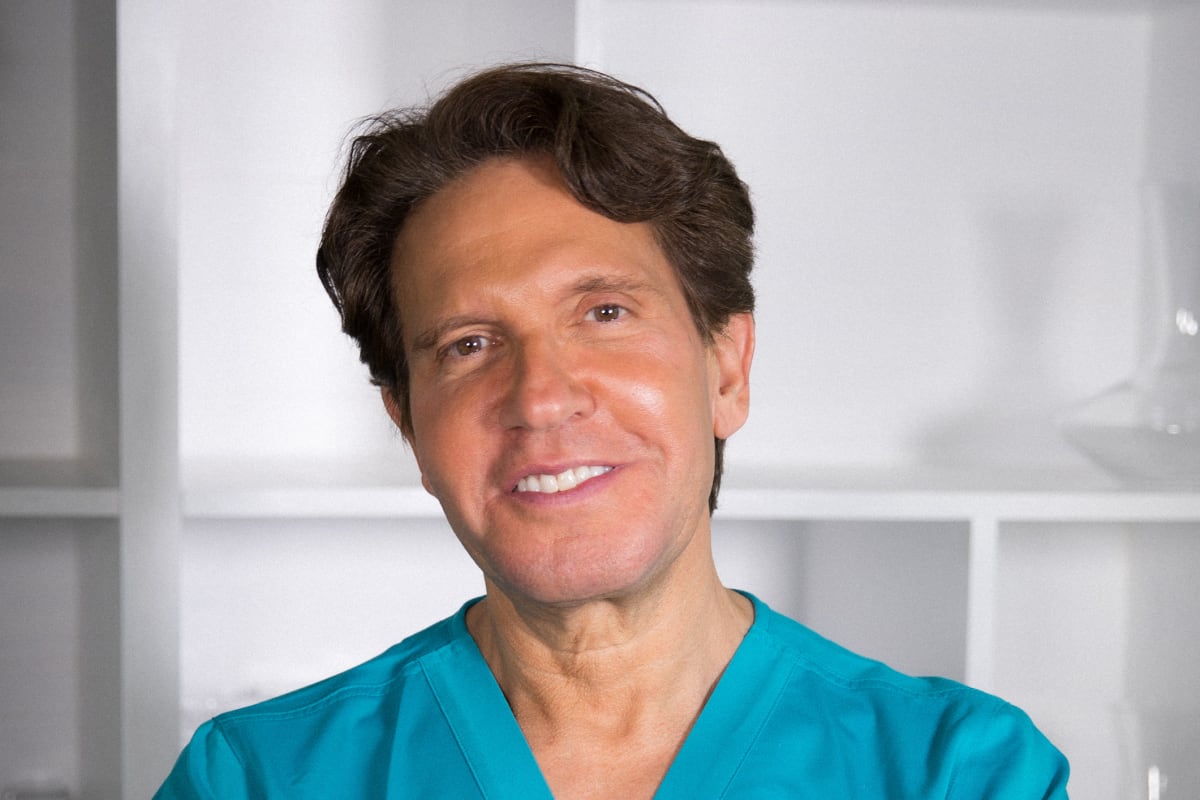 The last time we went, “Wow, Dr Dennis Gross is really killing it” — it was a reference to the DRx SpectraLite™ FaceWare Pro, an LED face mask that healed acne or smoothed out wrinkles. Such a simple solution, just pop it on and call it a day. With the DRx SpectraLite™ BodyWare Pro (think of it as the body version of the FaceWare Pro), we thought “Wow, we have to interview Dr Dennis Gross about it” because frankly, it seemed a little too good to be true.

Perhaps, the good doctor was smart to plug this gap in the market (neglect your body, much?) and perhaps even smarter to realise how we now truly need every thing we use to be diverse. The DRx SpectraLite™ BodyWare Pro combines 148 red lights and 68 blue lights to treat wrinkles and acne, reduce visible dark spots and alleviate mild pain over the body. All just in three minutes, the average opening scene & set up of a Netflix drama.

Here, in this interview with Dr Dennis Gross himself, he’ll tell you the science.

Hello Dr Dennis Gross, apparently you’re one of New York Magazines best doctors so thank you for the interview. But did you know that one of the best moments about being a grooming or beauty editor is receiving a PR package from your brand?

Thank you very much!

A bit of a loaded question to ask immediately, but why can’t we use the Faceware Pro on parts of the body that fits it? Example, the contours around our thighs or arms?

From the physical design to the quantity of LED lights, the FaceWare Pro was strategically designed to sit flush to the face for optimal results. While it may generally contour to certain areas on the body, the flexible and mouldable design of the BodyWare Pro will allow you to ensure the device sits completely flush to the body area you are looking to treat. When sitting directly on clean, dry skin, the LED lights are able to penetrate more deeply, giving you better results.

If you could sell the concept of the DRx SpectraLite™ BodyWare Pro to a non-believer, what would you say?

At my New York City practice, I have seen a dramatic increase in patients searching for a “head-to-toe glow” and full body treatments. As such, I wanted to provide my customers with a convenient, non-invasive at-home treatment that is as close to the professional, in-office experience as possible.

Given the success we’ve seen with the FaceWare Pro, I wanted to offer my clients the opportunity to treat their bodies with the same LED technology to target body acne, fine lines, wrinkles and hyperpigmentation. Clinical testing has been done to prove that the BodyWare LED device effectively treats aging and acne concerns on the body.

Was there a reason why the DRx SpectraLite™ BodyWare Pro only has red and blue lights?

The device has both red and blue LED lights that can be used together or individually, pending on the setting selected. Red and blue LED have undergone extensive studies to prove their effectiveness. Other colours of light, like green for example, do not play a role in LED therapy.

Is there also a reason why the timeframe for use of the product is a very specific three and 14 minutes?

The BodyWare Pro was built with careful precision and went through significant rounds of clinical testing to ensure we provided my clients with the best possible experience – from both a safety and an efficacy standpoint. Just like the skin on our faces, the skin on our bodies have receptors for LED, just like any other topical ingredient – vitamin C, niacinamide, hyaluronic acid, etc.

As such, these receptors have limits for how much they can intake. Beyond these time suggestions, the treatment would be null and void. That said, my recommendation is to use the device on a daily basis for three minutes for acne and aging concerns and fourteen minutes for pain management.

How often should we use it then if we want to get rid of our acne? Can it be used for more than three minutes and let’s say, thrice a day?

The best practice for treating body blemishes with BodyWare is using the device for three minutes every day on the areas you’re looking to treat. Using the device more than recommended will not harm you, but it will not speed up treatment time, either. Again, our skin cells have receptors for LED that reach their peak after three minutes, meaning any treatment beyond this point will not make a significant difference.

How is the product flexible? That’s quite a feat, actually.

The BodyWare Pro was made with a mouldable material so that it can be flexed and placed on any area of the body you’re looking to treat. For example, it can be wrapped around your arm or leg, laid flat on your neck and decolletage, or placed on your back. Ultimately, we wanted to make this device comfortable and easy to use.

Lastly, just out of curiosity, what is a song you’ve been reloading as of late on Spotify?

I am a big Mick Jagger fan — his radio is my go-to on Spotify. I can’t pick just one song.

This story first appeared on mens-folio.com.


Omega is the official timekeeper for Tokyo 2020 Olympics