MF Couch: The Project Power cast on the definition of superheroes, their roles and New Orleans 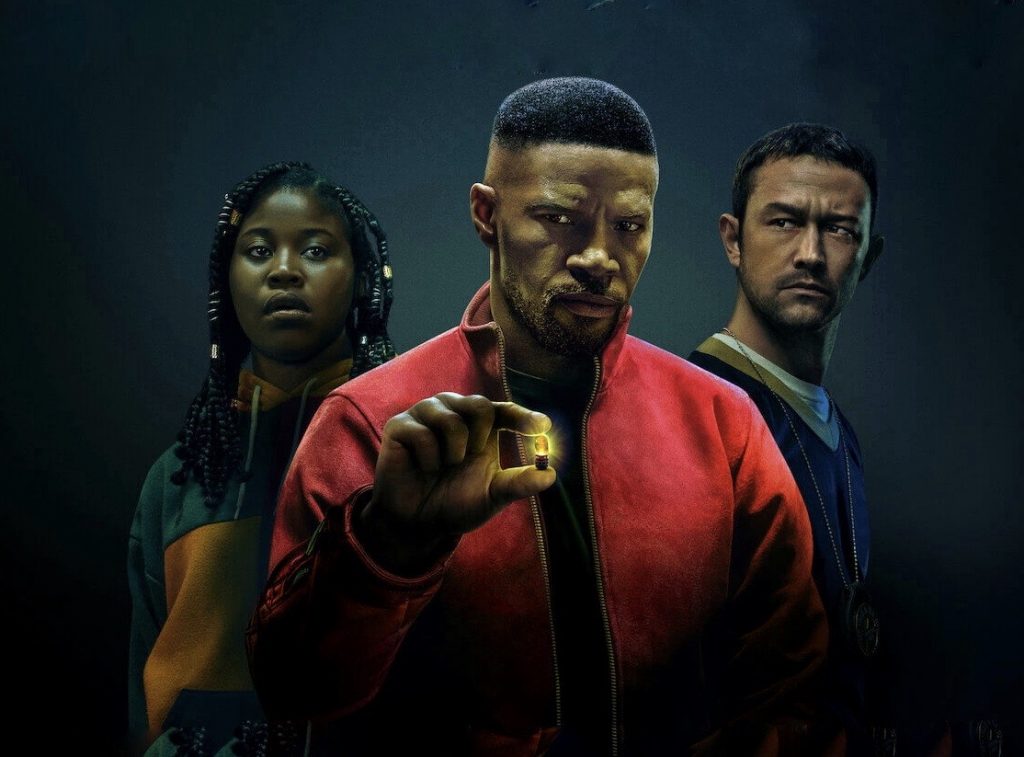 If you could take a pill and have superhuman abilities for five minutes, would you take it no matter the risk?

That’s the idea behind Netflix’s upcoming sci-fi action flick, fittingly titled Project Power. Stacked with an all-star cast including Jamie Foxx, Joseph Gordon-Levitt, Dominique Fishback and Rodrigo Santoro, the action film imagines a world where an illegal drug can generate superpowers for five minutes at a time, with one catch: the taker doesn’t know what their gift (or in some cases, curse) is until they take it. Just before the movie release, we jumped on a Zoom interview with the leading casts to talk about superheroes as well as the inside scoops.

What is your definition of a superhero?

Dominique Fishback (DF): My definition of a superhero is someone who extends whatever powers they might have to help other people. It can just be your words, whatever gifts that you have inside. If you can use that, to lift people up, I think that that’s what makes a superhero.

This movie explores the superhero genre in an interesting and unconventional way. Why do you think the audience would be captivated by it?

Jamie Foxx (JF): I think it’s sort of an escape; putting a cape on, it’s nice. Sometimes you want to rock a cape especially when it gets a little chilly and you can wrap it around. But the other side of it is what this movie is about. (The power) comes from a pill. A pill that you can take, and you don’t know what you’re going to get. 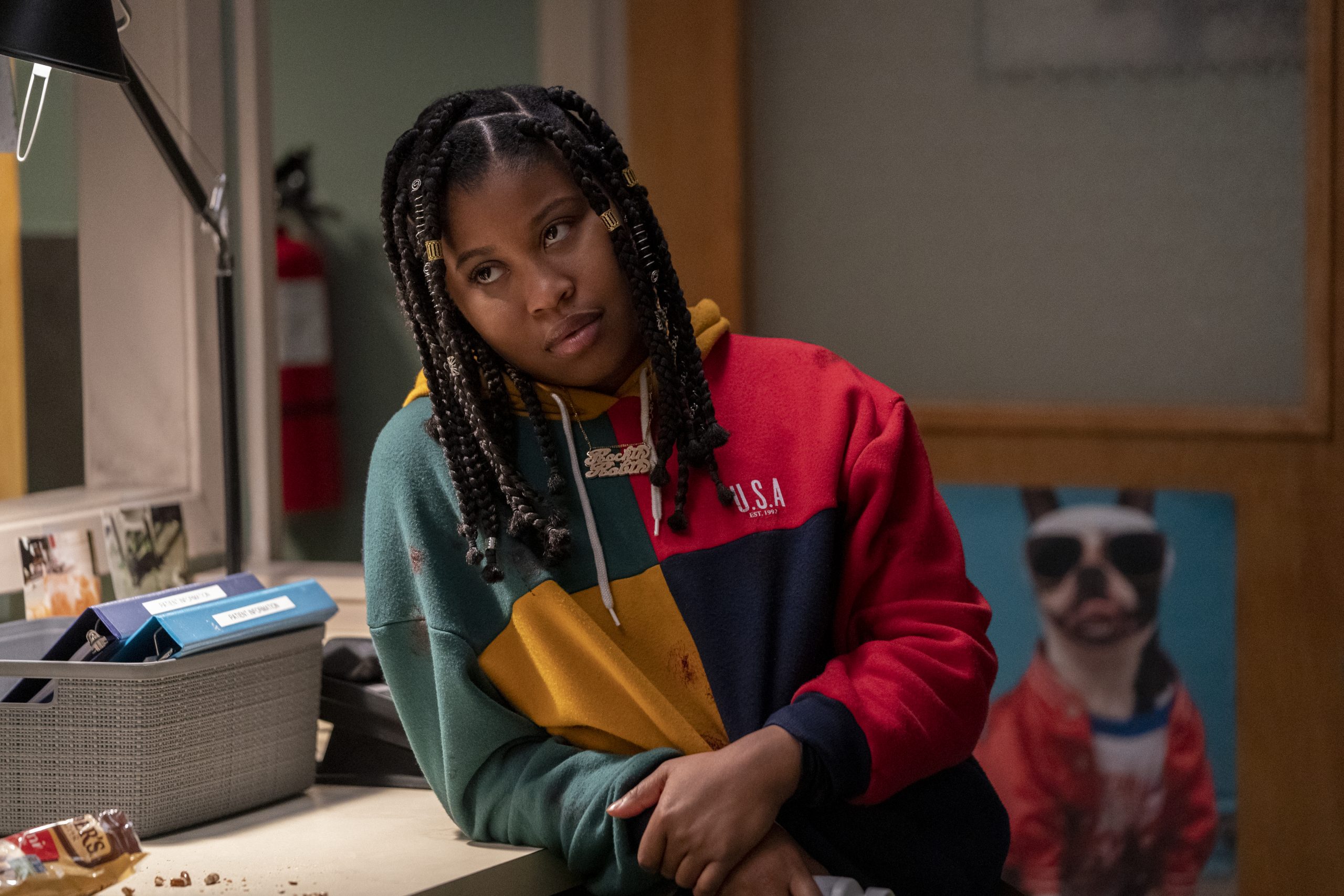 Everyone in Project Power is morally compromised in some way or other. No one quite fits the  conventional description of a superhero. What was it that drew you to this particular part; this particular character?

Joseph Gordon-Levitt (JGL): Well, I honestly just thought it would be really fun. I just took a couple of years off acting because I’m a dad now. And I wanted to spend some time with my babies. And my first job back was this movie called 7500 – which also just came out. And it’s a very intense, very heavy, very serious movie. And after doing that, I just want to do something fun. So when I read the script and saw that it’s going to be Jamie Foxx, and we’re gonna get to go to New Orleans, I mean, this was definitely going to be fun. So, I signed up, and it was.

Jamie, it’s so rare that we see movies shot where they’re set. As an actor, what does it mean to you that a movie set in New Orleans is actually shot in New Orleans?

JF: I’ll tell you, New Orleans has a has a vibration. It’s like a vibration that can like get inside of you and really make you feel amazing. Like even the rain there makes you like being wet. It was something about the place that just made it special. So, when you can show the city, and the way the city looks, it becomes a character. It actually became a character in the film. And so a shout out to the people that were in New Orleans that helped us make this incredible, incredible project. You know, because they have a leg up over everybody else when it comes to where we want to shoot. I mean, to me, that’s where I would love to be. They have a certain amount of skin that is just like beautiful. And I like to be wrapped up in it. I don’t even know what I’m saying. But it’s just amazing. 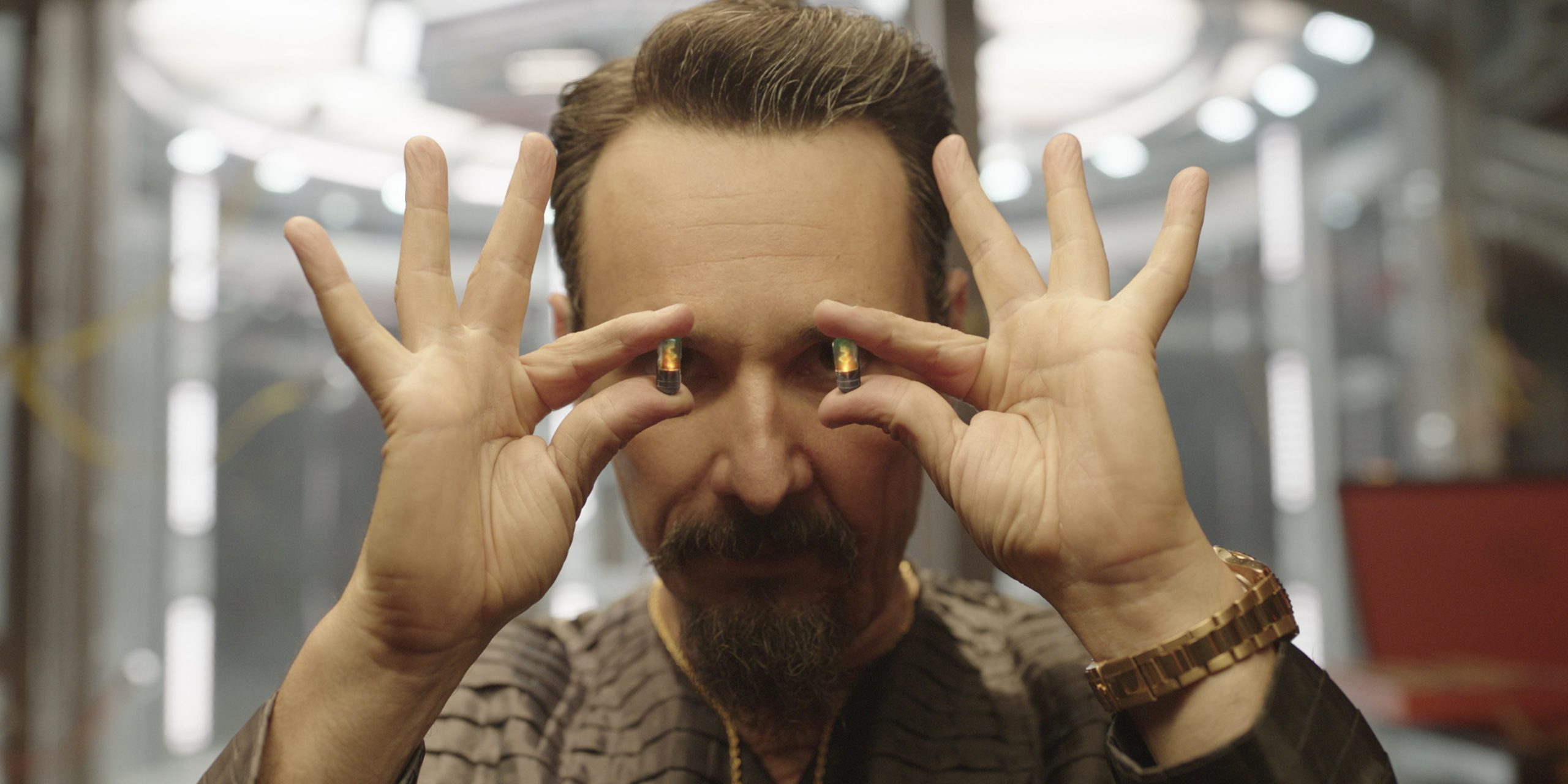 Rodrigo, in movies like Project Power, it’s clear that the person having the most fun is the one playing the big bad guy. So who is Biggie and what makes him tick?

Rodrigo Santoro (RS): I agree with you. I don’t know if I had the most fun, but I had a lot of fun playing it. Biggie is, you know, a salesman. He is the main representative of Power. He has got big ideas. He wants to sell Power all over the world and to make it big – like make a big splash with this product. He thinks he’s going to change the world. He’s a visionary and he’s very confident in his vision. That’s the character he built for himself to be able to seduce people and to sell underneath that. He is also a very insecure, weird guy that doesn’t know how to be or how to fit. And he just wants to be accepted and to be somebody. There’s a reason why his name is Biggie, which becomes very clear in the movie. I mean, not only physically, but it’s about getting big. It’s about making it big. It’s about, you know, having power. It’s about how far human beings go just for power to have things become bigger. Metaphorically speaking, of course.

Dominique, sandwiched between all of this action and explosions is a thread about Robin finding her own superpower, which in this case means finding her own voice. I was wondering if you could speak to Robyn’s insecurities as well as her determination to stay away from using power and stay clean.

DF: I think she feels a little bit lost. Her mom is sick. And if she loses her mom, she has no one, because she doesn’t have a father. She has this dream of being a rap star. And so, when Jamie comes blazing into her life, it looks unfavourable. But he really does change her life.  And he encourages what she already has inside of her. And so, I just loved that change, from her thinking that she needed her father, to learn that, no, she’s actually just looking for herself. And that this is the way in which you find yourself. That was that was really exciting. But for me, I would rather take a pill. Can we see what kind of powers she got? I would have been excited to see that. But I do understand her. Just the power of her having not taken it. Tapping into who she actually is, was probably a bit more powerful. No pun intended. 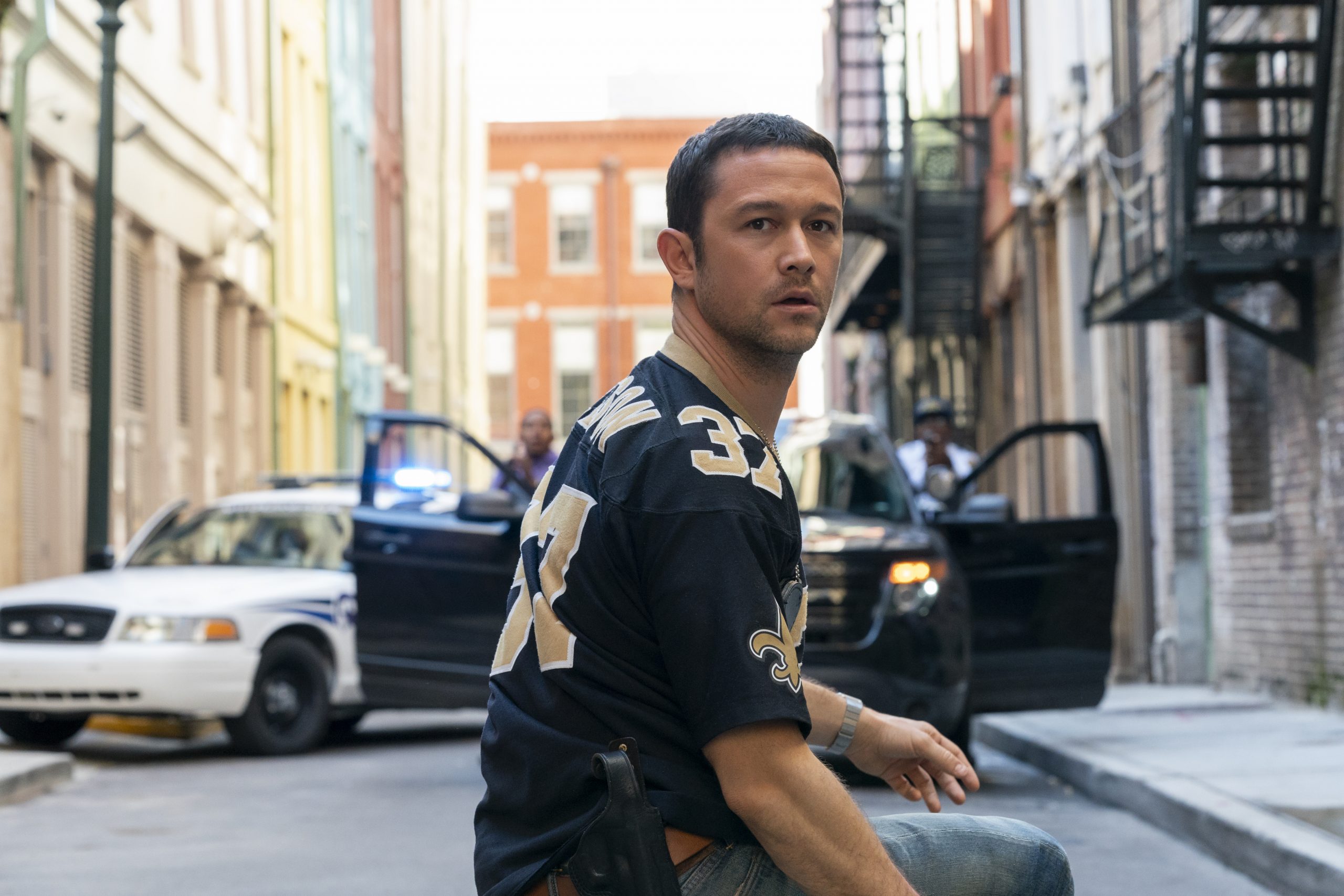 JGL: That’s a really good question. Honestly, I don’t think there really is much of a difference. There’s definitely a difference in how it’s received. But when we’re shooting, we shoot it like any other film. I suppose that, as things evolve, there will be more and more differences. But for now, we just made a movie, and it’s exciting to me that so many more people are going to be able to get to see it because it’s on Netflix. And, you know, let’s be honest, movies can be expensive. And I love the cinema. I loved sitting in a dark room with a crowd full of people and sharing a film together. I think it changes it. But, cinemas can be expensive. And I like the idea that the things I work on get out there and be accessible to as many people as possible, and not just people that have money. Granted, not everybody has Netflix, but a lot more people do. And that’s exciting to me.

What do you want the audience to take away from Project Power?

DF: So it’s super exciting, the idea of this pill, and that’s the big question, what would you do if there was a pill for five minutes? But at the end of the day, we don’t have that pill. And so, I would hold on to the fact that Robin’s power is within, like Jamie’s character tells her. So I would want people to be excited of the fact that we we do have power. We have power inside of us. And discovering it can be one of the most beautiful experiences of our lives.

JF: What I want them to take from this film is Dominique Fishback, because she is amazing. She will be standing in front of an audience one day saying: “I would like to thank the academy. I’d like to thank the members. I’d like to thank my momma. I’d like to thank Brooklyn.” To me, this is a coming out party for her. The movie itself is amazing. But she’s someone who really brings the humanity to the film. And she brings it in a way, man, that is vulnerable. That is powerful. And it really is to her power that does lie within. And so, I cannot wait. Hashtag Fishback. 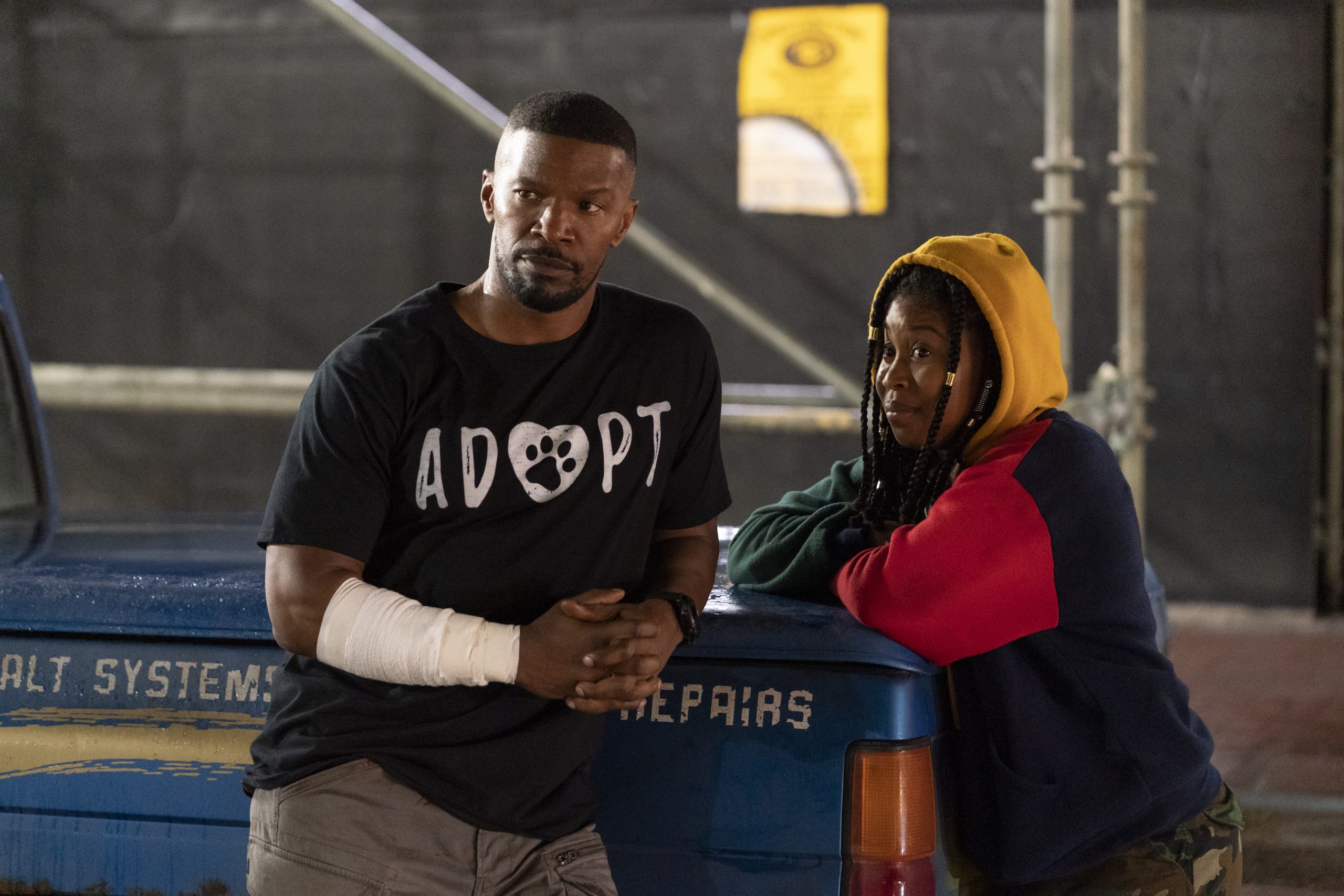